This Awesome Story About Sabrina Ionescu’s Father Confirms What We Already Knew, ‘She’s The Best’ 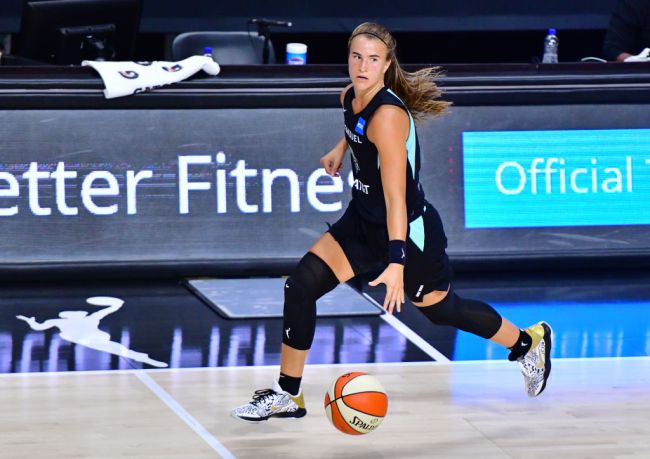 Sabrina Ionescu has been considered one of the nation’s top women’s basketball prospects since a very young age. She was the No. 1 overall recruit out of high school, made history in her four years at Oregon and was selected first overall in the 2020 WNBA Draft. It was a dream come true.

As the only NCAA Division I basketball player to record 2,000 points, 1,000 assists and 1,000 rebounds in her career, Ionescu’s trophy case is filled to the brim with nearly every individual award imaginable and her impact at Oregon was immense. In the year before her arrival, average announced home attendance for the Ducks was 1,501. Throughout her four years, the average attendance skyrocketed to over 10,000 in her senior season. She is considered one of the best four athletes in school history — alongside Marcus Mariota, Steve Prefontaine and Phil Knight — and her polarizing talent makes her a household name in not just Eugene, but across the United States.

It has been Ionescu’s goal to play in the WNBA since she was just a little girl, and her dream came true when she played her first game with the New York Liberty on July 25, 2020. In her second game, she dropped 33 points, 7 assists and 7 rebounds in 34 minutes of play and her career was off to a great start before an ankle injury ended her rookie year on August 1st.

She is set to make a full recovery before the upcoming season and will be an immediate impact player in the league— something that her father always knew she would be. Dan Ionescu fled Communist Romania around the time of the 1989 revolution to seek political asylum in the U.S. He left his then-wife Liliana Blaj, and their son Andrei in their home country with hopes of having them join him in a few months, but they were unable to move until 1995. Two years later, Dan and Liliana became parents to Sabrina and her twin brother Eddy. The rest is history.

Chicago Bulls and White Sox Director of Content Luka Dukich recently told a story on Twitter about the time that he met Dan in San Francisco. Sabrina’s father was driving for Uber a few years back and started talking basketball with Dukich, saying that his daughter was not only a good player on the court, but the best. He was right.

This is a true story. I was in San Francisco a couple years ago, and got to talking to our Uber driver. He was a friendly Romanian dude. He asked me about work and we started talking ball. He told me his daughter was going to play college basketball. “She must be good!” I said.

We talked hoops a little bit longer and he gave me his card in case I ever needed a ride somewhere.

Couple years later it turns out he was 100% right. She WAS the best. pic.twitter.com/pJnkn1gM58

Sabrina confirmed the story on Twitter not long thereafter.

Ionescu has been a ridiculously good basketball player for a very long time and her dad has believed in her all along the way. He believes that she is the best, and on the collegiate level, it’s hard to deny that belief. Her WNBA career has yet to play out, but she’s already on her way to being the best to ever do it.