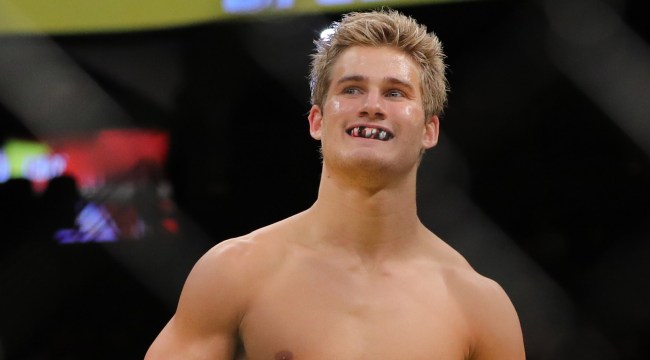 23-year-old Sage Northcutt went 6-2 in the UFC while under contract to the company from 2015 to 2018. Not a bad run for most people, but it wasn’t good enough for UFC president Dana White who following Northcutt’s release said he thought the young fighter still needed more work in “other organizations.”

After considering a move to Bellator, Northcutt ended up signing with Asia’s largest global sports media property, ONE Championship.

On Friday in Singapore, Northcutt made his debut for his new organization at ONE: Enter the Dragon versus multi-time kickboxing champion Cosmo Alexandre from Brazil.

Northcutt himself was also a kickboxer, having gone 15-0 professionally after being the youngest person ever to be on the cover of Sport Karate Magazine at the age of 9, so much was expected of the fight.

Unfortunately, it only ended up lasting 29 seconds after Northcutt ate a devastating right hook from Alexandre (now 8-1), turning out Northcutt’s lights and sending him to the hospital.

Here’s another look at the brutal punch that ended Northcutt’s night.

JUST. LIKE. THAT! Cosmo Alexandre knocks out Sage Northcutt 29 seconds into the first round 👊 @CosmoAlexandre #WeAreONE #EnterTheDragon #Singapore #MartialArts pic.twitter.com/Nh32Z1LNjU

As if it wasn’t bad enough that he lost the fight to drop to 11-3 in his MMA career, Northcutt had to undergo nine hours of surgery on his face to repair eight fractures, according to and Instagram post he shared following the repair work.

“Fresh out of surgery…I had 8 fractures and a nine hour intense operation. Feeling blessed for the amazing care and all the support from @onechampionship, my family/friends and fans! My Terminator face is not too Shabby.. 💀“I’ll be back!” Next post is catheter removal😳…stay tuned-JK,” he wrote.

As you can see from the x-rays of his face on the wall behind him, Northcutt will be on the shelf for awhile before fighting again.