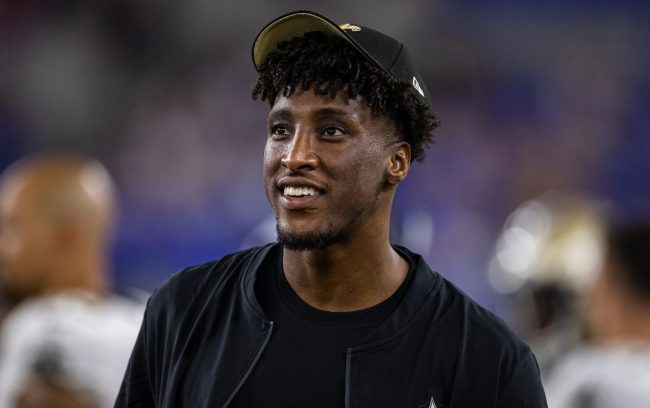 The New Orleans Saints have had a rather busy offseason as the front office made multiple changes to the roster in preparation for the 2022 season. With a new head coach, a more clear vision at the quarterback position, and a revamped wide receiver core, this team could make some noise this year. However, head coach Dennis Allen made a bold claim about Michael Thomas that could make this franchise a true threat.

Saints HC Claims Michael Thomas Is All The Way Back

New Orleans has been extremely patient with Thomas since he injured his ankle in 2020. It’s been a long journey, but Michael Thomas is set to return for the upcoming season. However, many have been questioning whether or not he’ll be the same elite receiver he’s always been. According to Ari Meirov, the Saints head coach likes what he’s seeing out of his star receiver.

#Saints HC Dennis Allen on WR Michael Thomas: "When I watch Michael Thomas at practice, I see the Michael Thomas that I saw pre-injury. I see a big, strong, physical, receiver that makes a ton of contested catches. I saw it in these practices. I see a guy that looks pretty good."

If any of this is true, then the Saints should be one of the best teams in the league this season. New Orleans will have a star-studded receiver room with Michael Thomas leading the way. Additionally, rumors are Alvin Kamara may avoid suspension this season as well. Combine all that with a solid offensive line, competent quarterback play, and an elite defense and you have yourself a playoff contender.

Look for the Saints to make some noise this season with Dennis Allen serving as head coach. Especially if his comments about Michael Thomas are true. This franchise has a legitimate chance to win the NFC South, even with the Tampa Bay Buccaneers riding it out with Tom Brady.