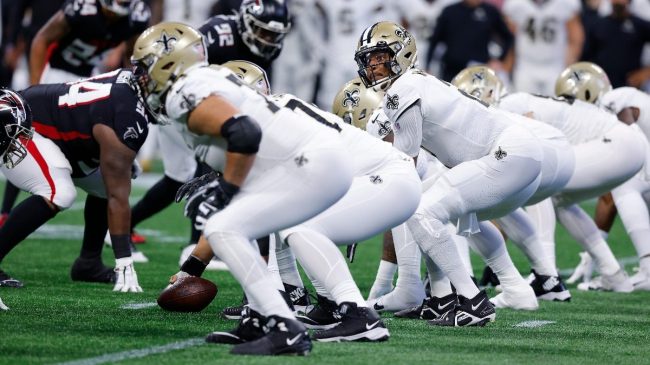 The New Orleans Saints face off against the Tampa Bay Buccaneers on Sunday and it should be a great NFC South matchup. However, some concerning news regarding Jameis Winston has arisen ahead of the game. Due to a brutal back injury, the NFL world is concerned for Winston’s health.

Saints QB Jameis Winston Playing With 4 Back Fractures Vs. Buccaneers

According to Pro Football Talk and Jay Glazer, “Winston is playing with four fractures in his back and is dealing with a lot of pain, but adds that doctors do not believe he’s at risk of further injury by playing through the injury. Winston will be playing with additional padding in hopes of protecting the injury.” At least doctors don’t believe the Saints quarterback is at serious risk, but it is still concerning to hear.

Back injuries are no joke. Especially when someone is suffering from four fractures. Despite that, Jameis Winston is playing through the pain. Hopefully, nothing serious happens on Sunday, but all eyes will be watching the Saints quarterback.

We all want to watch the best version of football but when a risk like this is in play, most people share their concerns.

I’m all for a continuation of Winston’s come back but this sounds like career suicide.

Saints fans and Buccaneers fans at least have something in common.

As a Bucs fan I hope he doesn’t get hurt more today. I feel like he’s taking on a risk that really isn’t worth it long term.

We’ll see how the game plays out. Hopefully, Jameis Winston doesn’t sustain any more injury to his back. Keep an eye on the Saints, as everyone is keeping tabs on the quarterback situation.