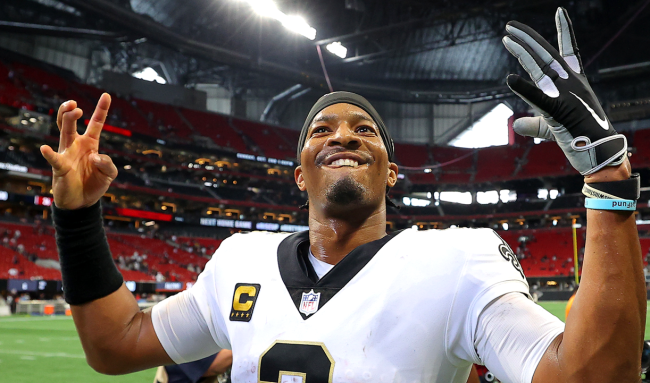 One can certainly debate whether or not Jameis Winston is a good NFL quarterback.

After all, there haven’t been any other quarterbacks who threw for over 5,100 yards in a single season (2019 with Tampa Bay) only to not only get jettisoned by his team, but to also not even earn a single start for his new team during the entire following season (2020 with New Orleans).

What can’t be debated, at least so far this year, is that Jameis Winston isn’t an interesting individual.

Winston, the youngest player to ever win the Heisman Trophy, has been entertaining NFL fans this year ever since his unconventional offseason workout went viral back in March.

Back in May, the way he descibed his new-found passion for football after signing a two-year deal with the Saints and graduating from Florida State, only served to garner him even more fans.

He’s been an inspiration, a fitspiration, invented incredible new phrases, and given us the one of funniest descriptions of the human body that we’ve ever heard.

And on Sunday, after Winston and the New Orleans Saints snuck by the Atlanta Falcons 27-26 in their season opener, Winston once again went viral, this time when was asked about going to the medical tent and the pain he experienced during the game.

“Just pain. It was pain everywhere, so we gotta keep on pushing through and being resilient,” Winston replied.

“I love this organization, I love these teammates, I love my team.” @ShannonSpake caught up with Michael Thomas and Jameis Winston after the @Saints 27-26 Week 1 comeback win ‼️@Cantguardmike x @Jaboowins pic.twitter.com/wF88Cq7RAv

Just like that, another classic Jameis Winston meme was born

When all three of your fantasy teams lose to start the year 😂 pic.twitter.com/CrEJgvcmtH

Many, MANY fantasy football players could relate to that on Sunday, as could Cowboys fans.

Many sports bettors could also relate to Jameis’ emotion on Sunday.