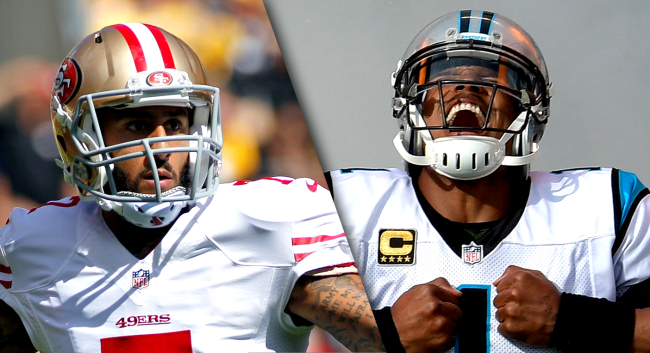 Many Cowboys fans are already in panic mode after Dak Prescott’s injury on Sunday and are calling for Dallas to sign Colin Kaepernick or Cam Newton.

Prescott, who went 14-29 for 134 yards with an interception on Sunday versus the Tampa Bay Buccaneers, will be out for six to eight weeks after surgery is expected to be performed on his right thumb.

“It’s very disappointing, but injuries happen, can’t necessarily control it, just unfortunate,” Prescott said after the loss to Tampa Bay. “Obviously going to miss some time, not be there for my team and that’s what hurts more than anything, especially after the start we just put out there. Wanted to be able to respond, and not necessarily having that opportunity for several weeks, yeah it’s unfortunate. But I’ll do what I’ve always done anytime adversity comes, take it on head-first and give my best and I’m sure I’ll come out of this thing better.”

Now speculation turns to who will be taking Prescott’s place as the Cowboys’ starting quarterback for a good chunk of the 2022 NFL season.

Several interesting names have been mentioned, including backup Cooper Rush, who was signed by the Cowboys as an undrafted free agent in 2017. The 28-year-old Rush, who played his college ball at Central Michigan, has played in 11 games over five years for Dallas, going 38-63 for 488 yards with three touchdowns and one interception.

Another quarterback who appears to be rising on the Cowboys’ potential list of replacements at quarterback is Lamar Jackson’s backup in Baltimore, Tyler Huntley.

Who can save the Cowboys season? @danorlovsky7’s proposal is this:

“I would call Baltimore and see if they would trade me Tyler Huntley.” pic.twitter.com/yGSjQIl6Aw

Two other names are also getting a lot of run on social media: Cam Newton and Colin Kaepernick.

Should the Dallas Cowboys sign Colin Karpernick or Cam Newton?

The 33-year-old Newton played five games for Carolina in 2021 and put up a abysmal 64.4 QB rating in five losses.

Kaepernick, who is 34-years-old now and claims he still wants to play in the NFL, last played in the NFL in 2016 when he threw for 16 touchdowns with just four interceptions for a 49ers team that went 1-10 with him as the starting QB.

Despite all of that, Dallas Cowboys fans, desperate to not see their season be, as Stephen A. Smith gleefully put it Monday morning, “over, right now!”

Our season is officially over in the first game. Just go sign Colin Kaepernick so we don’t have to give up anything else to get a QB. Cooper Rush is NOT the answer. We will be last in the NFC East if we don’t act now.

NFL Network analyst Akbar Gbajabiamila is fueling that fire, tweeting, “I’m hearing from a credible source that Colin Kaepernick could make his long anticipated return in to the NFL for the Dallas Cowboys.”

Some Cowboys fans just want the team to go all in and sign both Kaepernick and Newton.

Of course, Stephen A. Smith is among those wanting the Cowboys to sign Kaepernick, simply so he can troll the hell out of them some more.

What the heck, right? Dallas’ season is over anyway.