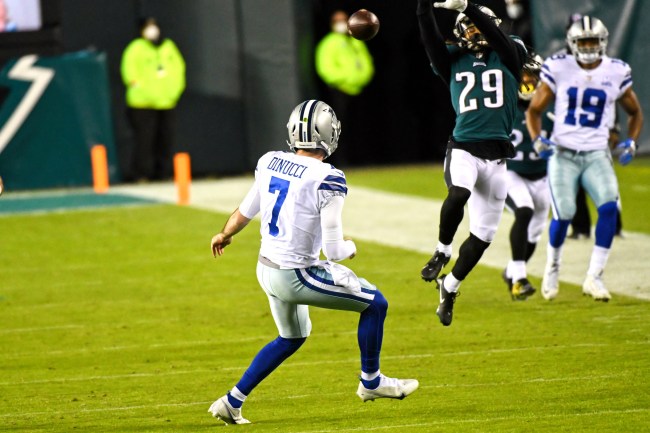 Cowboys owner Jerry Jones incredulously claims that the Denver Broncos being forced to start practice squad wide receiver Kendall Hinton at quarterback was no worse than the when the Dallas had to start Ben DiNucci.

No, really. He said that.

During his weekly radio appearance on 105.3 The Fan, Jones actually said these words: “I don’t know that Denver had any more challenge than we did with DiNucci or young quarterbacks we’ve had.”

For the record, as a senior at James Madison University in 2019, DiNucci started every game at quarterback, completing over 70% of his passes for 3,441 yards and 29 touchdowns, and also added 122 carries for 569 yards and seven rushing touchdowns. He earned All-CAA, CAA Offensive Player of the Year and AFCA first-team All-American honors.

Hinton, on the other hand, last threw a pass in a game in 2018, eight of them in fact, for Wake Forest, then played the entire 2019 season at wide receiver – the position he was playing on the Broncos’ practice squad when he got the call to play QB.

Not the same, Jerry. Not even close. Whatever Jerry is smoking, I want some.

Also during his weekly interview, Jones talked about what it will be like playing against former Cowboys wide receiver and oftime Dallas critic Dez Bryant.

“Dez is an eternal light of positiveness for our game,” Jones said about facing off against Bryant next Tuesday. “I couldn’t be happier to see him on the field. Now I’ll be worried because I know how that rascal can go up and get a ball.”

Bryant, who did not play football in the 2018 and 2019 seasons, made his return to the field last month with the Baltimore Ravens and has thus far caught four passes for 28 yards in two games.

Listen to Jones’ entire segment below…