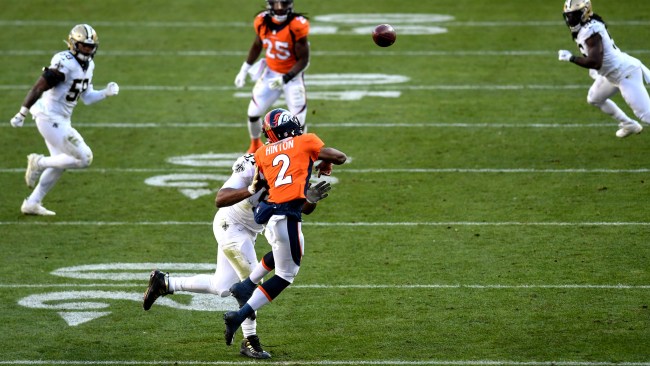 If you follow the NFL, even a little, then you are aware that the Denver Broncos played Sunday’s game versus the New Orleans Saints without a quarterback after all four on the roster were forced out due to coronavirus protocols. As a result, the team was forced to turn to wide receiver Kendall Hinton, a high school quarterback who started two games at quarterback for Wake Forest as a true freshman in 2015.

As expected, the 23-year-old struggled, going 1-for-9 for 13 yards with two interceptions in the 31-3 loss. (It could have been worse, former number two overall pick Ryan Leaf once had a game in his rookie year where he went 1-for-15 for 4 yards and two picks.)

After the game, despite his poor showing, fans, players and coaches were almost unanimous in their support of Hinton and how courageous he was after being placed in an absolute no win situation.

KENDALL HINTON DIDNT ASK FOR ANY OF THIS

I don’t wanna see not one person picking on Kendall Hinton . Dude had to play at the last minute. No Experience what so ever at QB other than college.

Kendall Hinton was a starting ACC quarterback. He went 1-for-9.

None of us would have even a shot at completing an NFL pass.

Hinton’s head coach Vic Fangio, who expressed his incredible displeasure with the quarterbacks on his roster for not following COVID protocols, leaving the team in a unwinnable situation, had nothing but praise for Hinton after the game.

Cool story out of Denver.

I’m told when Broncos got to the locker room, Vic Fangio shouted out Kendall Hinton, and told the team how proud he was for their fight today. Just about every player on the Broncos then came over to Hinton and dapped him up.

It truly was a once in a lifetime experience for Hinton – one that he never expected to have.

“I can easily say that was the most eventful 24 hours of my life, but when I got the call there was pure excitement. Of course, there was nerves and disbelief, but the encouragement the team gave me and guys just keeping me up the whole time, they made it a lot easier for me,” Hinton said after the game, reports the Associated Press.

Hinton admitted “tomorrow morning probably won’t be fun” since he hadn’t been tackled on a football field in two years, but he was still happy.

“I would not say this is how I planned it out in my dreams, but it usually doesn’t work out how you want it. So, just getting this opportunity and this experience has been amazing.”

What a weekend! Appreciate all the support 🤞🏾 #BroncosCountry

Throw in the extra cash Hinton got for playing QB on Sunday it was definitely an experience he will never forget.

Kendall Hinton will make the league minimum for a practice-squad player for being the Broncos' starting QB today. pic.twitter.com/yXA7GvZIrV