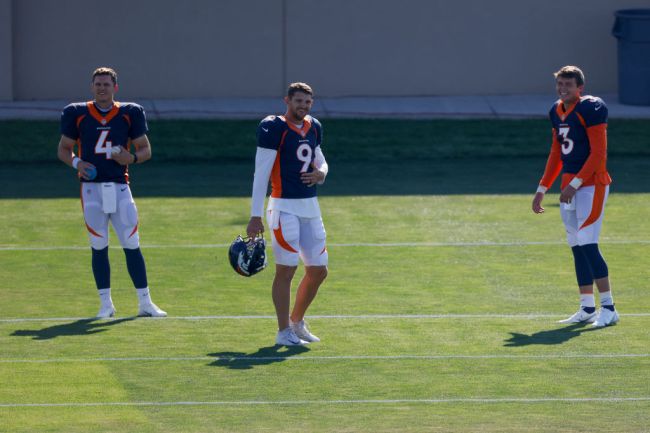 The Denver Broncos head into today’s game against the New Orleans Saints without a quarterback.

All four Broncos quarterbacks – starter Drew Lock and backupsJeff Driskel, Brett Rypien, and Blake Bortles – were ruled out of Sunday’s game after Driskel tested positive.  The other three players were around Driskel without a mask on for an extended period of time.

Unable to suit up Broncos team president John Elway, the team needed to search the roster for a replacement.

Hinton was a high school quarterback who started two games at quarterback for Wake Forest as a true freshman in 2015.

After that, Hilton spent three seasons as a backup quarterback before moving to receiver in 2019.

The 6-foot, 195-pound Hinton has never played in an NFL game at either quarterback or wide receiver.

For his entire college football career, Hinton had 1,504 passing yards with a 53% completion rate. He threw eight touchdowns and seven interceptions.

During his final season at Wake Forest, Hinton turn heads after his transition to wide receiver. He finished with 73 receptions for 1,001 yards and four touchdowns.

CBS Sports feels the Hinton move could add a different look to the Broncos offense, one that could see the team use Hinton’s legs more than his throwing arm.

Although it’s obvious that the game plan will have to be simplified, Hinton’s ability to create yardage in open space with his legs can allow the Broncos to dip into an area of his offensive system he may not have felt comfortable using with starter Drew Lock.