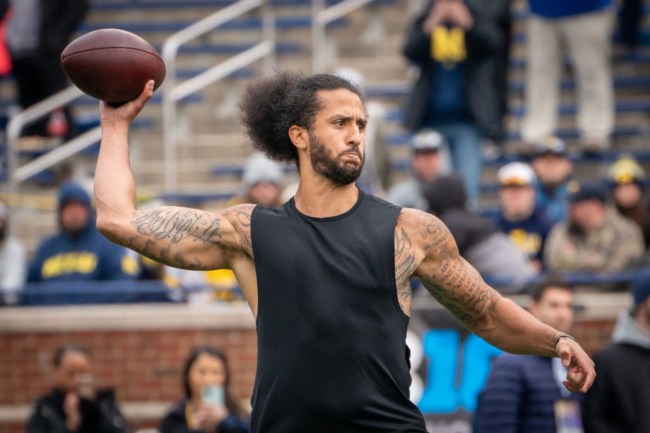 The Las Vegas Raiders inviting Colin Kaepernick to a workout back in May was huge news in the sports world. After the workout, however, it was nothing but crickets.

We didn’t see a video of Kaepernick’s workout and the Raiders absolutely refused to talk about how it went.

Warren Sapp thinks the reason nobody has seen or heard anything from Kaepernick’s workout is that it was “one of the worst workouts ever.”

“I’m wondering how the hell this happened, and the tape didn’t get out, right?”

Sapp’s comments were of course met with questions and pushback, including from Kapernick’s agent, Jeff Nalley, who said Sapp’s claim is “not true and you would think Sapp would want Kaep on a team.”

We’ve got a classic back-and-forth between Sapp and Kaepernick’s agent, but now former NFL linebacker LaVar Arrington has thrown his hat into the ring as well.

During a segment on his Fox Sports Radio show, Arrington questioned why Sapp would have any motive to lie while also explaining why Sapp could have inside information about Kaepernick’s workout.

“If you’ve played for an organization you know people in the organization. There’s certain places that you can get information that in other cases you wouldn’t get that information,” Arrington explained, per Larry Brown Sports.

“Sapp played for the Raiders, and Sapp probably has a relationship with a couple people that are in the organization. If Sapp didn’t know, hear, or have a discussion with someone who was in the organization he wouldn’t have even talked about it.”

Those are certainly fair comments from Arrington.

His co-host, Jonah Knox, agreed with Sapp while also giving a special shoutout to Pro Football Talk’s Mike Florio calling him “one of the biggest Colin Kaepernick ball washers” out there.