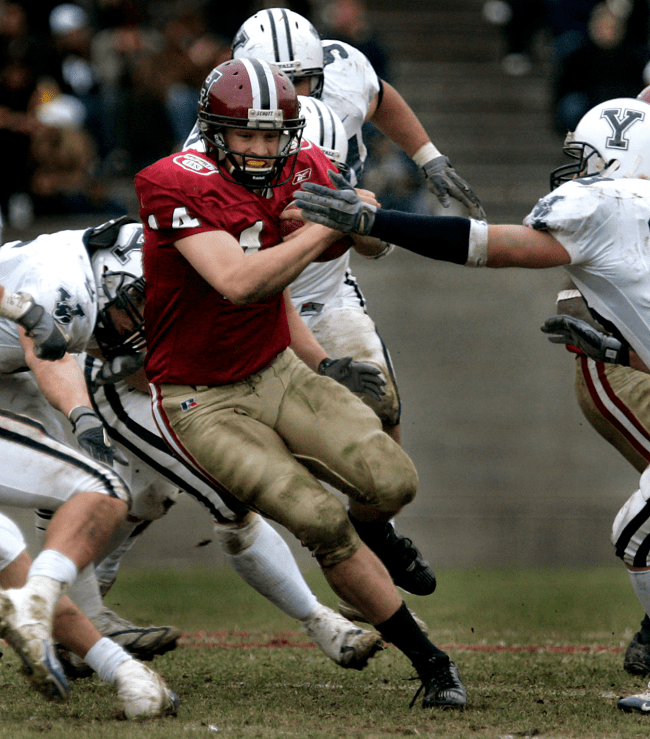 Ryan Fitzpatrick is officially retired from the NFL. After a 17-year career in which he started for nine different teams, the man they call ‘Fitzmagic’ hung up his cleats in June and announced his retirement in unique, creative fashion.

Over the course of the last (almost) two decades, Fitzpatrick has become a fan favorite. Everywhere he goes, excitement follows and all of the great stories throughout the years are a testament to his legend.

Fitzpatrick has always had that dog in him.

Prior to being drafted with the 250th overall pick in the seventh round of the 2005 NFL Draft, the Arizona-native balled out at Harvard. While with the Crimson, he became the school’s first quarterback to have over 1,000 rushing yards, was named the Ivy League Player of the Year in 2004 and won an Ivy League Championship that same season.

In a 2004 profile in the Harvard Magazine, Fitzpatrick opened up on his college career. He talked about a variety of topics, but his love of contact and “backyard ball” stood out.

“Sometimes, you have to make up plays as you go,” Fitzpatrick said. “Scrambling around is a huge part of our offense. You sit in the film room and design an offensive attack, and then on Saturday our biggest gains come from broken plays, making things happen. It’s so frustrating for the other teams’ coaches. I love that style—that’s the way I love to play the game.”

At 6-foot-3, 220 pounds, Fitzpatrick was a bruiser of a quarterback at Harvard.

Throughout his entire football career, there was always a willingness to go all-out and full-send on every play. Fitzpatrick consistently lowered his shoulder and fought for the extra yard. That’s just who he is.

“I’ve never been one to shy away from contact,” he said. “I always try to initiate the contact and run over anyone who tries to tackle me.”

Tim Murphy, his head coach at the time, had nothing but praise for Fitzpatrick.

“I’ve never had anybody in my career who’s as versatile as Ryan. He’s the most effective quarterback I’ve coached in terms of athletic ability, mental and physical toughness, and the ability to make clutch plays. I wouldn’t trade him for any other player in the league.”

During the 2003 season, Fitzpatrick broke a bone in his throwing hand and was suffering from knee, ankle and shoulder injuries. That didn’t stop him from throwing four touchdowns — and winning.

Since then, Fitzpatrick has gone on to become one of the all-time greats. Although he never reached a Super Bowl and often served in a backup role, it’s hard to deny him the title of greatest journeyman quarterback of all-time. And for that, Fitzmagic should be in the Hall of Fame. He’s a dog and always has been.