NFL World Lovingly Says Farewell To Ryan Fitzpatrick, Who Has Announced His Retirement After 16 Seasons 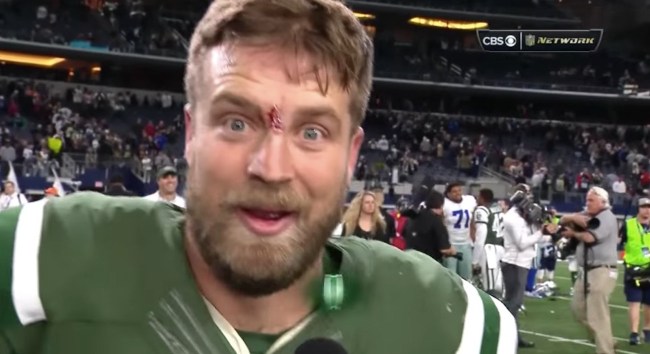 UPDATE: According to NFL Network’s Ian Rapoport, “sources say Fitzpatrick been engaged in talks with Amazon concerning a possible role as an analyst on Thursday Night Football.”

Ryan Fitzpatrick, one of the mainstays at the quarterback position in the NFL over the last decade despite never being one of the game’s elite players, has announced that he is retiring from the league after 16 seasons.

Originally drafted out of Harvard University by the (then) St. Louis Rams in the seventh round of the 2005 NFL Draft, “Fitzmagic” ultimately played for nine different NFL franchises and passed for 34,990 yards and 223 touchdowns.

Due to his journeyman career and gunslinger mentality, he is the only NFL player to throw a touchdown pass and interception with eight different teams. Additionally, he holds the record for quarterbacks in terms of most-franchises-started-for with nine: the St. Louis Rams, Cincinnati Bengals, Buffalo Bills, Tennessee Titans, Houston Texans, New York Jets, Tampa Bay Bucs, Miami Dolphins, and the Washington Commanders.

Looks like Ryan Fitzpatrick is calling it a career.

If so, what a ride for FitzMagic. https://t.co/gJwBMCCxcF

Ryan Fitzpatrick is responsible for one of the FEW years I've enjoyed watching the Jets.

That is a simply monumental achievement and for that, I salute him. Enjoy retirement Fitzy. pic.twitter.com/OJgduUC92e

Ryan Fitzpatrick is retiring from the NFL after 17 seasons

The one and only, Ryan Fitzpatrick, is retiring from the NFL. pic.twitter.com/SWGEjLlCnw

Ryan Fitzpatrick ends his career with more passing yards and more TDs than:

Understand different eras, but still a pretty epic career from a 7th round pick out of Harvard — way back in 2005. #Fitzmagic https://t.co/EITS5x82kg pic.twitter.com/O1MkjnhChq

Congrats on a Helluva career, Fitzy!! Loved sharing the field with you!! The gratitude is all mine!! #BillsMafia #fitzmagic pic.twitter.com/s7n4DsiLJ7

End of an era.

I need Ryan Fitzpatrick to sign a one day contract with the Bills and retire the right way. There is only one fanbase that loves him properly…. #BillsMafia

If Ryan Fitzpatrick has retired, this is our final #NFL memory of him.

Shirtless at a #Bills playoff game, the one where they blew out the Patriots in the perfect offensive performance.

The Rams were down to their 3rd-string QB.

Kind of wild that Ryan Fitzpatrick is the probably best QB the Dolphins have had in the past two decades? https://t.co/VW6A1rLjKF

Ryan Fitzpatrick is gonna be a QB coach, then OC, then head coach within about 6 years. https://t.co/CcNboA2O0B

Ryan Fitzpatrick should go down as one of the most underrated and unfortunate quarterbacks ever. Two 10 win teams that he quarterbacked didn't make the playoffs. His overall stat line stacks up favorably to a lot of signal callers who received far more acclaim.

Given his outsized intelligence and personality, it certainly wouldn’t be a surprise if the magic networks came knocking on his door to see if he’d be interested in taking up a career in broadcasting. And with the money that networks are giving quarterbacks to come call games these days, a man as smart as Fitzmagic would certainly kick the tires on play-by-playing being a potential career path.

As a Jets fan, I was lucky enough to root for Fitzpatrick during the 2015-16 season as he led the team to 10 wins. Despite not making the playoffs (because of course not, it’s the Jets), it’s one of the most successful seasons the franchise has had in the last decade (lol) and included this epic win over the Pats, which I was actually at with my Pops (it was the game where Bill Belichick outsmarted himself and decided to KICK in overtime). Thanks for the memories, Fitzmagic.