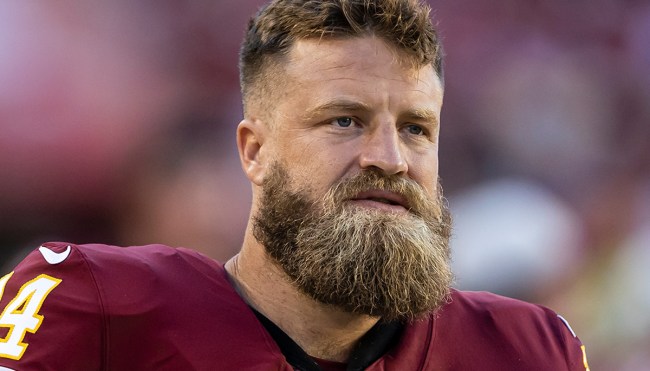 On Thursday, NFL fans were treated to some news that was far more devastating than it had any right to be after Ryan Fitzpatrick revealed his decision to hang up his cleats and retire at the age of 39.

The Harvard graduate was selected by the Rams in the seventh round of the 2005 NFL Draft, which marked the beginning of an NFL career where the quarterback played for nine different teams over the course of his 17 seasons in the league.

That journeyman status is a fairly accurate reflection of his decidedly average skillset in the pocket. However, there’s a reason Fitzpatrick managed to stick around as long as he did, as the QB was an incredibly knowledgeable player who served as a respected leader in many of the locker rooms where he suited up.

It was also hard not to love the fan favorite lovingly referred to as “Fitzmagic,” who has always come off as an incredibly genuine and relatable dude with a fantastic sense of humor. After all, we’re talking about a guy who went shirtless in the stands while cheering for the Bills during one of the coldest games in NFL history and had no problem admitting he overdid it on birthday cake after showing up to training camp packing a few extra pounds.

As a result, it’s a bummer to see him go. Thankfully, there are already signs that the end of his NFL career is simply the start of a new era based on a report that surfaced shortly after the news of his retirement broke.

According to Ian Rapoport, Fitzpatrick is just the latest in a long line of athletes who’ve eyed a pivot to broadcasting, as the NFL insider says the recent retiree has been engaged in talks with Amazon concerning a possible role as an analyst on Thursday Night Football.

A hip injury shortened his final year, but Ryan Fitzpatrick heads into retirement with some incredible moments and memories. And… I don’t think we’ve seen the last of him 📺 https://t.co/HZusrsLAIm

As long-time QB Ryan Fitzpatrick calls it quits, sources say he’s in talks with Amazon for a key role this season. So we’ll be seeing plenty of Fitz going forward.