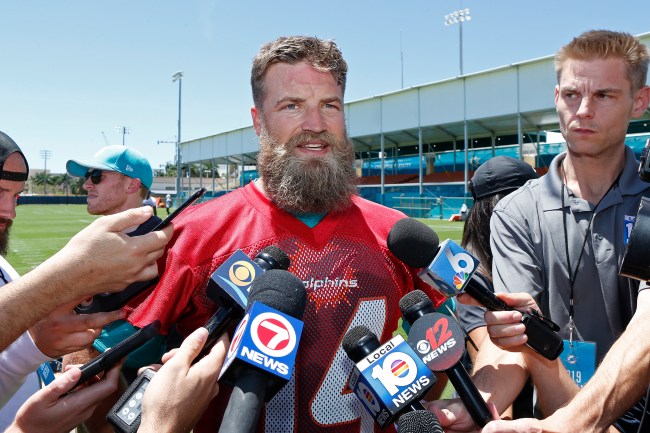 We are all Offseason Ryan Fitzpatrick.

Thiccpatrick rocked the internet last week when he showed up to a Dolphins offseason workout looking like he ate all of his career interceptions.

The 36-year-old journeyman has switched organizations for the eighth time in his career and has evidently taken the “What ya see is what ya get” mentality. Anyone whose been in the same industry for over a decade should be able to relate to Thiccpatrick’s indifference. There’s indifference, and then there’s giving up. Thiccpatrick looks like he’s toeing that line, before that toe is cut off due to complications with Type 2 Diabetes.

On Tuesday, Fitzpatrick hilariously described why he transformed into the Michelin Man this past offseason, or as he calls it, “peak offseason form.”

“I’d say I’m in peak offseason form. I think two weeks ago, I was in peak offseason form,” Fitzpatrick said. “The thing with me is I have seven kids. So in January, we have three birthdays. We’ve got a family birthday party, which includes cake. And then, we’ve got a friend’s birthday party, which includes cake. So that’s six times in January. We’ve got three birthdays in March — March 1, March 6, and March 11 — which, again, that’s a tough stretch. That’s cake six out of 10 or 11 days. Then, we’ve got an April birthday so it doesn’t slow down.

“But now that the birthdays are behind me, I think I’m going to try to go from peak offseason form maybe down to peak in-season form. I’ll be OK.”

There you have it, folks. The man’s had his hands tied. Don’t blame him. Blame the sex he’s had.

When you find out there are donuts in the breakroom pic.twitter.com/jFIh7Rl49D

When you find out there are donuts in the breakroom pic.twitter.com/jFIh7Rl49D

This how Ryan Fitzpatrick came in to the Dolphins training room to exercise today. pic.twitter.com/7BUVxAVRPP