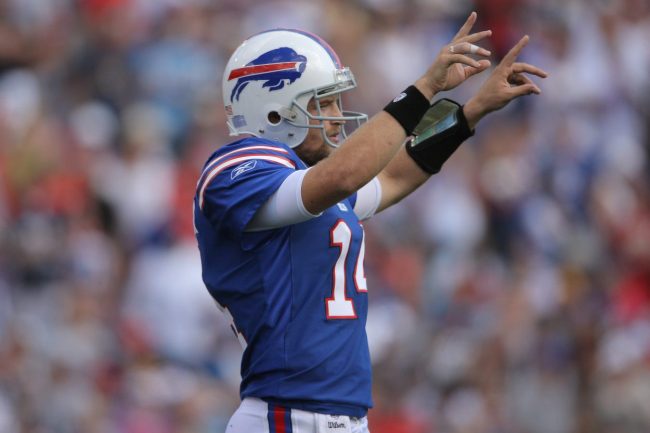 Despite being actively employed by another organization, 17-year NFL quarterback Ryan Fitzpatrick showed up to Saturday’s AFC Wild Card game between the Patriots and Bills. While there, in the historically freezing cold, the man they call ‘Fitzmagic’ popped his shirt off for the boys.

@ESPNNFL @SalSports @JeremyWGR @EWood70. The moment I caught on video Saturday night will be one of the greatest memories of my life. The passion! GO BILLS! pic.twitter.com/2rbOzpmVXi

When kickoff rolled around on Saturday night, it marked the Bills’ first home playoff game with a full capacity in 25 years. The atmosphere was electric.

Among those in the stands was Fitzpatrick. The 39-year-old journeyman has played for the St. Louis Rams, Cincinnati Bengals, Tennessee Titans, Houston Texans, New York Jets, Tampa Bay Buccaneers, the Miami Dolphins and the Buffalo Bills throughout his career.

Although it is soon to expire, he is currently under contract with the Washington Football Team and was serving as the team’s starting quarterback in 2021 before suffering a hip injury in the season opener. That didn’t stop him from showing out for the Bills, the team for which he played three years, the longest tenure of his career with any one single team.

Despite calling multiple cities home since he was drafted in 2005, Fitzpatrick has said before that nothing compares to Buffalo. He loves the team, its city and its people, and that was apparent on Saturday.

Fitzpatrick was amongst the Mafia.

The People’s Champ: Ryan Fitzpatrick.
(Fitz was in our section and was incredibly kind and took photos with every single person who asked. Like all of us, Fitz just wanted to see his Bills win big tonight. Fitz!) #GoBills🦬 pic.twitter.com/1POVstE77A

At one point, despite temperatures dipping below five degrees with a negative wind chill, Fitzpatrick braved the elements. He and a fellow Bills fan took their shirts off for a photo.

Yes. That’s a QB for another NFL franchise….shirtless at a Bills game. Your fan base could never. #BillsMafia

The legend himself, Fitzmagic. pic.twitter.com/V5brB0TmN0