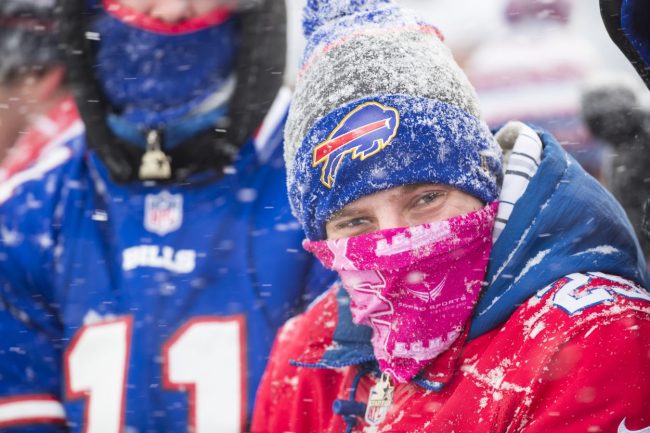 When Mac Jones and the Patriots take the field against Josh Allen and the Bills on Sunday, fans in the stands might need an extra layer or two. And that’s an understatement.

The current forecast for Saturday’s AFC Wild Card Game is going to be historically cold.

The high on Saturday night in Buffalo is 0 degrees🥶

The crew breaks down the Wild Card round matchup between the @BuffaloBills and @Patriots. pic.twitter.com/TcstY6icL5

And to make things worse, it will only get colder from there. By the time the game is over, it could feel closer to -15 degrees outside.

While that may seem unfathomable to most, it is not as big of a deal to the people of Buffalo. Even still, cold is cold is cold. Brr.

To counteract the cold, former Jets linebacker Bart Scott had a WILD suggestion for Josh Allen. Tight end Dawson Knox caught wind of the idea and made it clear that it is not necessary for him.

While Saturday will be frigid, it will not be the coldest in history. However, it could potentially crack the top 10 for coldest games of all-time.

In no order, here is the top eight:

Earlier this year, the Vikings and the Packers played in weather close to what it will be like in Buffalo. That game was a few degrees warmer, but at that point, when it is that cold, what difference does it really make?

Buffalo and New England have played each other twice this season and split the series 1-1. The Patriots won the first meeting in Buffalo 14-10 and the Bills won the second in Foxborough 33-21.

Their first matchup also took place in unusual, crazy weather. Winds were gusting up to 50mph and it was very, very cold. During that game, Bill Belichick and New England threw the ball only three times and ran the ball 46 times.

With the cold on the way, will the Patriots hammer the ground game once again?