Bart Scott Gives Wild Advice To Josh Allen, Tells Him To Take Viagra Prior To The Patriots Game 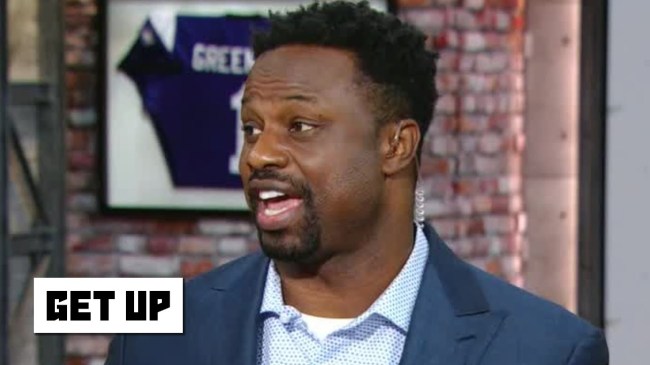 Here’s a summation of how depressing life is as a New York Jets fan: current ESPN analyst and former Pro Bowl linebacker Bart Scott is responsible for one of the most electric moments in the modern history of the franchise. I’m talking, of course, about the infamous “CAN’T WAIT” postgame interview he gave to Sal Paolantonio following the Jets shock upset of Tom Brady, Bill Belichick, and the New England Patriots back in the 2011 AFC Divisional Round.

After losing to the Patriots in the regular season by a score of 45-3, the Mark Sanchez-led Jets went up to New England when it mattered most and beat the Pats by a score of 28-21, setting up an AFC Championship game against the Pittsburgh Steelers (which they lost) and delivering us one of the most iconic NFL postgame interviews in recent memory:

As a result, I’ve always had a soft spot for Bart Scott, even when he blurts out craziness like he did on this morning’s episode of Get Up, where he told Buffalo Bills quarterback Josh Allen to take Viagra prior to this weekend’s game against the Patriots in order to keep the blood circulation flowing. In fact, Scott says this is a trick that NFL players have been using for some time.

The NFL Playoffs will begin on Saturday at 4:30 p.m. when the #4 seed Cincinnati Bengals host the #5 seed Las Vegas Raiders. Saturday’s action will conclude with the #6 seed Patriots visit the #4 seed Bills in Buffalo.

Then, on Sunday, the #7 seed Philadelphia Eagles will visit the #2 seed Tampa Bay Bucs at 1 p.m., the #6 seed 49ers will head to Dallas to take on the #3 Cowboys at 4:30 p.m., and the weekend’s action will conclude with the #7 seed Pittsburgh Steelers heading to Kansas City to take on the defending AFC champion #2 seed Chiefs.

The Wild Card Round doesn’t end there, though, as the #4 seed Los Angeles Rams will host the #5 seed Arizona Cardinals in the first-ever Monday Night Football playoff game.

RELATED: The Internet, Including Julian Edelman, Made So Many Jokes About Bill Belichick’s Sick ‘Danger Zone’ Hoodie