The Internet, Including Julian Edelman, Made So Many Jokes About Bill Belichick’s Sick ‘Danger Zone’ Hoodie 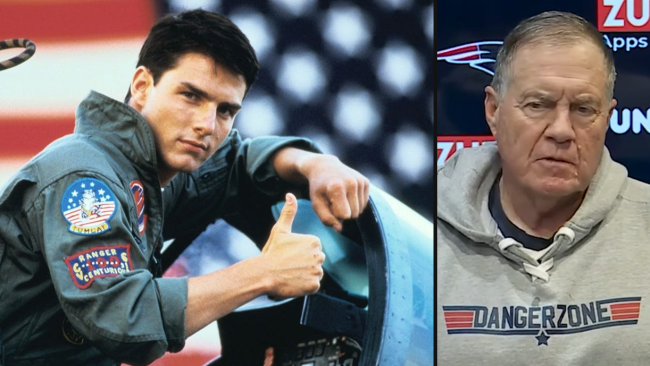 If there are two things we know about Bill Belichick it’s (1) he is a very good football coach, and (2) he truly DGAF about his wardrobe. (Though he does seem a little bit proud of one fancy coat that he owns.)

Oh, he’s also really good at doing things that turn him into a meme. He’s just so relatable!

On Wednesday, in the midst of getting his New England Patriots ready for their first playoff game without Tom Brady, Bill Belichick went deep into his closet for a very special fashion choice.

Got some BAD news for Buffalo:

Bill Belichick is in the danger zone. pic.twitter.com/CYdLTJPE1N

Related: Why Does Bill Belichick Cut The Sleeves Off His Sweatshirts? The Answer Is Pure ‘Hoodie’

Belichick was asked about his “Danger Zone” hoodie during the press conference (because HOW COULD YOU NOT?) and his response was just about what you might expect.

“Hey, Bill, real quick, I want to ask where’d you get that sweatshirt? What’s the origin of it?” a reporter asked The Hoodie.

“The player says… something that the players did… for a couple years ago,” he replied.

Wisely, the reporter then quickly moved on to a question about having to play the Buffalo Bills for the third time this season on Saturday night.

Others, who are far from the reach of a Belichick death stare – people on the internet – were not so quick to move on because it’s Bill Belichick wearing a damn “Danger Zone” hoodie!

Even one of Belichick’s former players, Julian Edelman, had to get in on the fun.

I’m a bills fan, this scares me

Throwing my tuition on pats https://t.co/CMrlm3pMwu

Saw this hoodie he was wearing and immediately heard Kenny Loggins in my head.https://t.co/0yzMstP3RN

I bet Joe Judge loves it

I need this hoody. #statthat

Man, the NFL just isn’t going to be the same when Bill Belichick finally decides to retire.