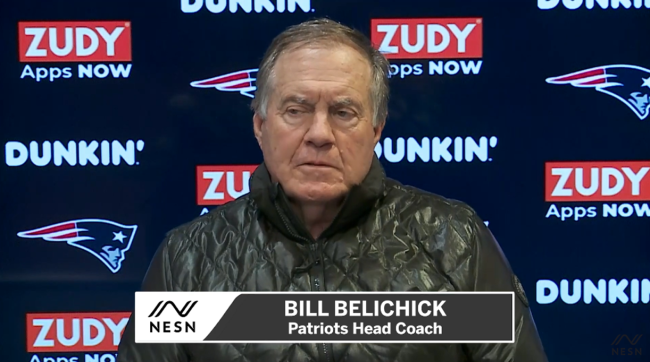 From hoodies with the sleeves cut off and his ridiculous face masks to how he wears a baseball cap and whatever the hell this is, Bill Belichick always marches to the beat of his own fashion drum.

Monday morning, as he participated in his weekly press session to talk about Sunday’s game, one reporter, Dan Roche of WBZ-TV, noticed that Bill Belichick appeared to be wearing a coat the media pool had never seen before.

“Thank you,” Roche said after Belichick answered his question, adding, “Like the jacket.”

The compliment on his coat elicited a surprising response from The Hoodie. He broke out into a big grin and told Roche, “Appreciate it.”

Why Bill Belichick was wearing a coat while inside the building is a mystery, however.

Numerous NFL fans immediately jumped on social media to have a little fun with the comment, Belichick’s rare positive reaction, and to his sweet coat.

Linda 100% bought that jacket for Bill.

Interestingly, this is actually not the first time that Coach Belichick has busted out this particular coat. He was also wearing it this past January at the Senior Bowl, accessorized by his flex-worthy custom visor that simply read “VIII Rings.”

Remember, not only has Belichick won six Super Bowl rings with New England he also won a couple of rings as an assistant for the Giants under Hall of Fame coach Bill Parcells.