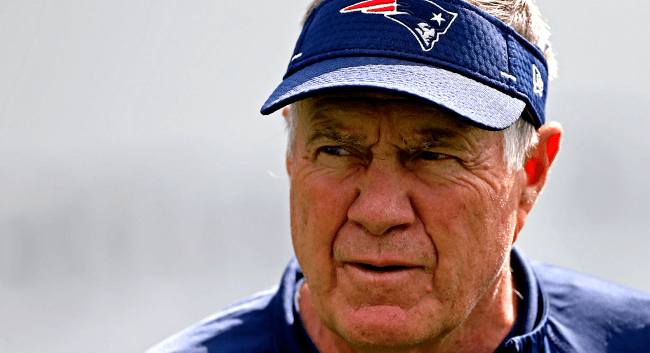 The word loquacious has never, ever been used to describe New England Patriots head coach Bill Belichick. After Friday’s press conference, however, it might actually apply.

About halfway through his daily media session, a reporter asked Bill Belichick to talk about roster building, and in particular the position of long snapper.

“I have a question that’s a little out of left field,” the reporter asked. “It’s about roster building and not having to do with the game this week, but it’s something I’ve been thinking about for a while and it’s about long snapping actually. And I was just kind of wondering and this is no, with all due respect to, Joe Cardona and all the fine long snappers out there, but is long snapping that difficult that you need to use a roster spot on one player who does only that? Can’t you just cross-train a few guys to do long snapping and then have more flexibility with that roster spot?”

Almost 10 minutes later, the reporter had his answer, and then some.

Related: Bill Belichick’s Latest Diatribe Against Social Media Is A Necessary Reminder That We’re All On It Way Too Much

“Yeah, well, you know, Ben, it’s an interesting conversation and one that’s really, I would say honestly during the course of my coaching career has kind of traveled that that long and winding road from when I came into the league,” Bill Belichick began his speech.

“The specialist, first of all, there were no long snappers, but the specialists, the kickers and the punters were frequently position players and that’s where they came from in college as well. So a lot of the good college punters and place kickers also played a position and then as time evolved, you know, starting with like Gogolak and guys like that, you know, they specialized in kicking and then you had, you know, some of the punters that specialized in punting so players like Danny White and Tom Tupa and guys like that who were, you know, very good position players, you know, became, Gino Capoletti, you know, that that evolved into specialists because of, I would say, the importance of the kicking game and the number of, you know, the number of plays that the kicking game and opportunities that it provided.

“Same thing with returners,” Belichick, amazingly, continued. “There are very few just pure returners. I think one of the, the long snapping, to me, changed in the mid 80s and really, the key guy in that was [Steve] DeOssie, in my opinion, because Steve was the first center that really truly
allowed a spread pun formation against the all-out rush.

“Prior to that, teams would generally pull, first of all, there wasn’t that many gunners, but when teams started using gunners they would pull one in and kick away from the free guy on the backside and that was kind of the idea of the protection, was not to let the snapper block against the nine man rush with a split player. So the return team would have one guy on the gunner that split, one guy returned, so you got nine guys rushing against essentially, you know, the punter, who wasn’t a blocker, the split guy who wasn’t a blocker, and the snapper, who really wasn’t a blocker, so it was nine on eight and the idea was to block the most dangerous eight and let the ninth guy go and punt away from them.

“And then when the Cowboys went to the spread punt and the Cardinals followed that pretty quickly and they kept two gunners split and the snapper blocked a guy then that created an eight on eight situation, but put a lot of pressure on the snapper to, you know, deliver the ball 15 yards deep on the money and still block a good rusher, you know, offsetting the A-gap,” explained Bill Belichick.

“I mean, we’ve all seen offensive linemen have trouble making that block on a pass play and so now you’re talking about a deep snap and a block, but as players got better at that and and that skill became more, I would say, players became more efficient at that, then, you know, teams decided to carry a long snapper rather than worry about getting a punt blocked. Plus, there was also the level of consistency and durability with those players so if you lose a position player who’s also a long snapper, you know, you’re looking at some some real problems. And that evolved into the punters for the most part becoming holders because the amount of time that they could spend with the kickers versus having a a wide receiver or quarterback be the holder, which again, you don’t see very much of that anymore… assuming the punter is, you know, capable and good enough, you know, has good enough hands to be the holder and so then that kind of whole unit has really evolved into, you know, a specified snapper, a specified kicker, a specific punter, and generally, the punter as the holder, so the three of those guys could work together all practice because they’re all available.

“And I know, again going back to when I first came into the league, you worked on, you know, field goals and, I mean, it was maybe you know five minutes because that was the only time the starting center and the starting receiver or backup quarterback or whatever were available to practice that
so, like, is it that hard? It’s a pretty hard job, yeah? It’s a pretty hard job. It’s not as hard as it used to be because you’re not allowed to hit the center, especially on field goals, and and, you know, run them over and there are some limitations on the punt rush based on, you know, what the formation is and so forth, but generally speaking, but still, it’s a hard block to, and and I think you see most punt rushers attack the snapper so they loop guys back, so the center thinks he’s going right, but then he has to come back to the left or maybe they fake like they’re coming back, but they don’t come back so he he not only has to snap and so then that gets into whether you’re a blind snapper and you look at the rush and just snap the ball or whether you’re a look back snapper and snap it and then after the snap you have to look up and recognize what’s happened and make the proper block, but again, it’s man-to-man blocking, like that guy’s got to block somebody or you’re a guy short, so it is a hard job and the accuracy of the, I would say, the place kickers through the years, which has gone up dramatically, part of that’s the surface, part of that’s the, you know, not kicking outdoors and so forth, part of it is the operation between, you know, the snapper, the holder, and the kicker, which I would say, generally speaking, is at a pretty high level, which it should be, in the National Football League, so I think if you go back and look at, you know, kicks from back when that wasn’t okay, you know, you see balls rolling back and the holder coming out of a stance to catch the ball and the kind of things you see, you know, at times in a high school game and that kind of thing.

“There’s just a much higher level of skill, which there should be, but yeah I think it’s a pretty tough position and, you know, nobody knows or cares who the snapper is until there’s a bad snap and all of a sudden it’s a front page story. So, you know, there’s a decent amount of pressure on that player as well not just the snap, but also, as I said, to, you know, to block in punt protection.

“So as the roster sizes have increased it’s been a lot easier to carry that player. Just like it’s a lot easier to carry a true returner and so, in terms of depth and availability, you know, you really don’t want to be looking for one of those players in the middle of the of any time, middle of a game or middle of a season, but when you have him, as you know, a starting receiver or starting, you know, starting tackle or, you know, whoever those guys and they’re playing and something happens, not only use a player, but you know, you lose a key specialist as well.

“So, yeah, that’s, I mean, it’s a great question. It’s and, you know, there would be so much value in a player that could do a couple of things and save a roster spot, but I would say there are so few of those players available even to the point where, and you know, Amendola did a great job last week, but it’s so rare that you even see a combination punter and place kicker. Usually it’s one or the other and I think part of that is, you know, at one level it’s, you know, I’ll say, relatively easy to put your foot on the ball, but at this level, you know, the difference in kicking mechanics and punting mechanics are so different that it’s really hard to be good at both.

“But, you know, if a guy’s got a good leg and he’s a good athlete and, you know, you make good contact with the ball, there’s a point where, you know, high school, college, you know, maybe it’s good enough, maybe he’s the best guy on the team to do that, but I’d say at this level that’s pretty, you know, that will be asking a lot.

“That’s a good question. It’s really interesting and I’d say if you look at the evolution of those positions over the last, you know since, I’ve been in the league, but even a little bit before then, because that’s really where it started to go, was in the late 60s, like, I think, Gogolak, you know, was the first or one of the first where that trend really started to, okay, we’re just going to keep a guy and all he does is kick, you know, Yepremian and guys like that, that’s all they did. That was, so it was a little bit unusual, but, you know, gradually that’s become the new norm.”

The reporter, who obviously got WAY more than he expected, then told Bill Belichick, ‘Uh, thank you Bill. That was as thorough and in-depth as I’d hoped it would be.”

To which Belichick replied, “Oh, you’re welcome, Ben, thanks for the question.”