Bill Belichick Pulled Out His Finest Hole-Covered Sleeveless Sweatshirt For A Press Conference And People Had Many, Many Jokes 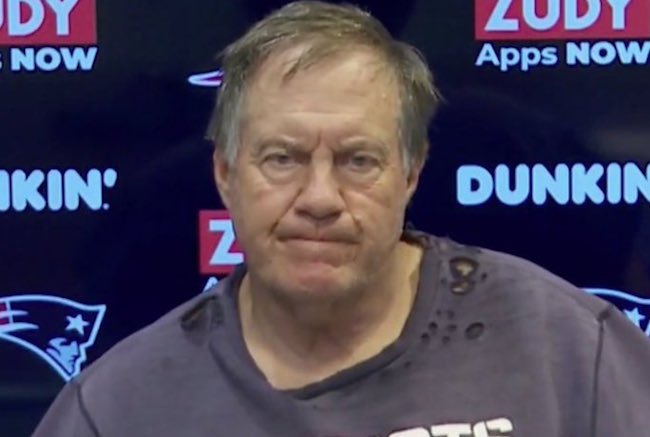 There was once a time when NFL coaches took the field clad in the suit and tie the guys at the helm in the NBA and NHL usually rock during games. However, the kind of attire that the likes of Vince Lombardi and Tom Landry wore while patrolling the sidelines eventually gave way to a more casual look after the NFL changed its dress code in 1993 to require these field generals to wear apparel branded with their team’s name or logo.

These strategic masterminds may be all business when gameday rolls around but the vast majority of the outfits they don are the very definition of “casual,” and while some coaches do what they can to look as presentable as they can given the fairly limited options they have to choose from, that is firmly not the case when it comes to Bill Belichick.

When the legendary coach is inevitably inducted into the Football Hall of Fame, there would be no better way to honor his fashion legacy than immortalizing him with a bronze bust featuring his head draped in the hood of the sweatshirts he’s so fond of cutting the sleeves off of—which he did for the first time in 2003 before deciding to really commit to the bit in 2005 (some say he did it to spite the NFL for making him serve as a walking mannequin for their apparel sponsors but Belichick claims it’s simply because of his tiny arms).

His love for ratty clothing is perhaps only rivaled by Andy Reid’s affinity for Hawaiian shirts and there aren’t many things more jarring than seeing him roll into a press conference wearing a button-down, which is basically his version of black tie. However, he decided to go the opposite route while speaking with reporters on Wednesday morning, where he rolled into the interview room and said “I could not give less of a shit” without having to say anything at all courtesy of the hole-covered top he decided to pull out for the occasion.

After taking a brief trip through the photo archives, it would appear he began rocking this particular sweatshirt as early as 2016 and it’s safe to say it’s seen some shit over the past few years. 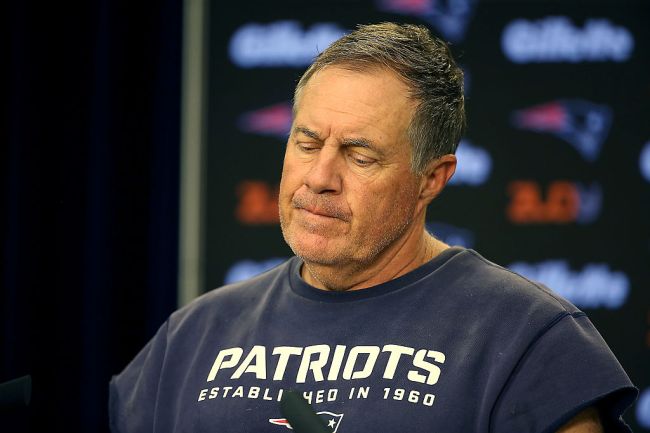 As someone who refuses to part with similarly beat-up tees I wore when I was in high school, I can understand why Belichick might be attached to this particular piece of his wardrobe, but with that said, the ones I own are exclusively reserved for the confines of my apartment as opposed to public events broadcast to the masses who didn’t hesitate to start cracking jokes.

“I’m gonna want the milk steak boiled over hard and a side of your finest jelly beans, raw” pic.twitter.com/Df8HF9S1wF

Bill Belichick is The High Sparrow in Game of Thrones. 😂 pic.twitter.com/QKa90LUWPJ

Bill Belichick is all of us.

“Established in 1960” is referring to the sweatshirt itself pic.twitter.com/LdJYJEVnKB