Why Does Bill Belichick Cut The Sleeves Off His Sweatshirts? The Answer Is Pure ‘Hoodie’ 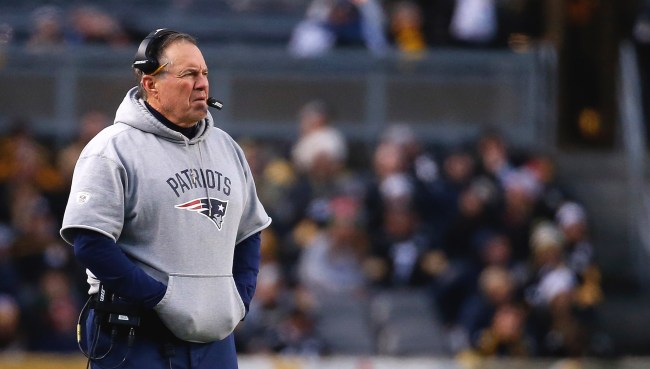 For several years now, New England Patriots head coach Bill Belichick has been cutting the sleeves off his sweatshirts when he appears on the sidelines of NFL games, but most of us fans had never been given a solid reason as to why. Until now.

No, it’s not a fashion choice, says Belichick. Though it wouldn’t be terribly surprising because, as we all well know, Bill knows fashion.

According to Tom Curran of NBC Sports, the reason Bill Belichick cuts the sleeves off his sweatshirts is purely, and unsurprisingly, a pragmatic one.

“Belichick was driven to distraction by his sleeves in the Patriots Super Bowl XXXIX win over the Eagles. Belichick was just fiddling and tugging and tucking until finally he rolled them up inside themselves. The next season, Belichick took action. In the fall of 2005, Belichick walked into the team’s equipment room, laid a gray sweatshirt on a table and he then lobbed off both arms juist below the elbow.

Of note, every single Patriots playoff loss, including three Super Bowls and two AFC Championship games, came when Belichick wore a sweatshirt with the sleeves cut off.

Something for all you degenerate gamblers out there to keep in mind.

There is also the story of how back when the NFL signed a deal with Reebok that required coaches to wear approved clothing during games, Belichick deliberately chose the more boring thing he could find: a grey sweatshirt.

“It’s comfortable,” Belichick told Yahoo! Sports’ Dan Wetzel in 2012. “I carry my stuff in my pouch.”

Naturally, fans then started wanting to buy their own sweatshirts with the sleeves cut off, so they could look just like “The Hoodie.” Because who wouldn’t want to be just like this guy?