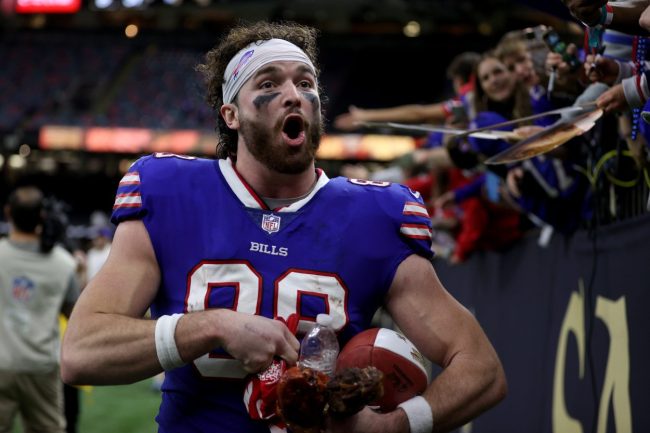 When the Buffalo Bills take the field against the New England Patriots on Saturday night, it is going to be unfathomably cold. As of this writing, the temperature at kickoff is set to hover around four degrees with a wind chill in the negatives.

To counteract the cold, former New York Jets linebacker Bart Scott had a wild suggestion on ESPN’s Get Up. He suggested a trick that he claims NFL players have used to stay warm for a longtime— taking Viagra before the game.

Viagra, a medication that can be used to treat erectile dysfunction, helps relax phallic muscles and arteries and increases blood flow. Thus, Scott suggests that players, including himself, take the pill before cold games to keep blood pumping through the body.

That means that NFL players have been running around the field fully erect for quite some time.

Bills tight end Dawson Knox is not one of them. He wanted to make that very clear on Thursday.

Prior to the game, Knox spoke with media about the upcoming matchup. When Scott’s suggestion was brought up, he was quick to shut down the idea.

Dawson Knox said he heard Viagra can make a player test positive for PEDs, so he's not going to try that trick to stay warm Saturday. He also said he'd need a prescription to take Viagra, & made it clear he does not have said prescription.

I think we all need this game to start.

Knox wants to be very clear that he does not need a Viagra prescription. Everything is in order and working properly.

An all-time response from Dawson Knox to @MattParrino this afternoon #BillsMafia @WKBW pic.twitter.com/P1QMQ1c08m

Knox, who has burst onto the scene over the last two seasons, is an absolute monster. Although former Ole Miss offensive coordinator Phil Longo managed to keep him from scoring a single touchdown in college, he has scored nine times this season.

And then, of course, there was this very angry run last year:

And he did all of this without Viagra.