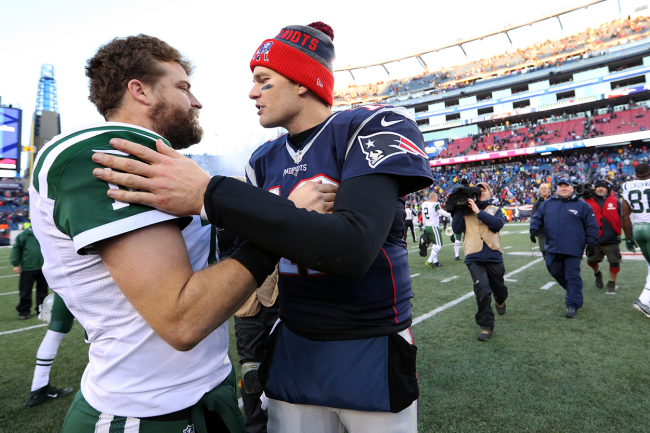 Over the course of the past few years, Tom Brady has been called out multiple times for his lack of postgame handshakes, particularly after losses. Now Ryan Fitzpatrick is getting in on the conversation and sharing his own experiences.

The narrative surrounding Brady’s handshakes really began to heat up after the Super Bowl in 2018, when he didn’t shake hands with Nick Foles after losing to the Eagles. A few years later, after facing Foles during the regular season, Brady did not shake his hand for as second time.

Not long thereafter, the greatest quarterback of all-time did not shake hands with Derek Carr, which was ironic because he did shake hands with Aaron Rodgers after beating him. And then he got put on blast once again after skipping out on a handshake with Jared Goff following a loss to the Rams and was annihilated by NFL Network’s Kyle Brandt.

Brady came out and addressed the Foles snub earlier this year and said that he tries to be the best sport that he can.

Now, a few months after his comments, Fitzpatrick is disputing Brady’s claims about his handshake snubs.

During an appearance on ESPN+ show ‘America’s Caddie,’ Fitzpatrick was asked to share his favorite NFL memory. In response, the 18-year journeyman said that it was beating Tom Brady. Specifically, he said that his favorite memory was beating Brady the second time.

Fitzpatrick beat Brady with the Bills in 2011 and then again with the Jets in 2015. Following the second win, Brady did not shake his hand.

“Beating Tom Brady … the first time, because after the first time he didn’t shake my hand,” Fitzpatrick said. “I was on the Jets (to beat him again, four years later), and I had to chase him down on the 50-yard line … Apparently, he hates losing more than everybody else hates losing. When he does lose, I want a handshake.”

To make things even better, Brady apparently has beef with Fitzpatrick. He is considered to be the “motherf—er” that the Buccaneers quarterback was referring to during a viral clip last summer.

Brady doesn’t lose often, but when he does, it appears as though he has a handshake problem.