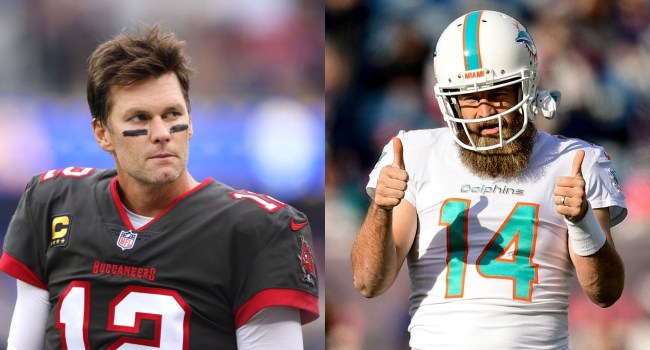 Due to Brian Flores’ allegations against the NFL, fans of the league now know that Tom Brady is the ‘prominent quarterback’ that Miami Dolphins’ Stephen Ross wanted Brian Flores to meet with, which would’ve violated NFL tampering rules.

As we know, Brady ultimately ended up in Tampa Bay with the Bucs, but he did briefly discuss the Dolphins’ failed recruitment of him during an episode of HBO’s The Shop last summer. At the time, it wasn’t known that he was talking about the Dolphins.

“One of the teams, they weren’t interested at the very end. I was thinking, ‘You’re sticking with that motherfucker?” Brady said at the time.

Now, however, due to the allegations made by Flores, NFL fans have realized that the “motherfucker” that Brady was referring to was then-Dolphins QB Ryan Fitzpatrick.

Now that Brady has officially retired from the NFL, “that motherfucker” Ryan Fitzpatrick is now the oldest active quarterback in the league. And frankly, how dare Brady refer to a fellow NFL legend with such disrespect? Fitzpatrick may not have ever played in a Super Bowl, but he’s arguably one of the most well-liked players in the league over the last decade and has carved out a 16-year NFL career — with many of those years being as a starting QB — after being drafted in the seventh round of the 2005 NFL Draft. Not any old “motherfucker” could pull that off. I stand with Fitzmagic.

RELATED: The NFL Has A New Oldest Active Quarterback And He’s Already A Legend