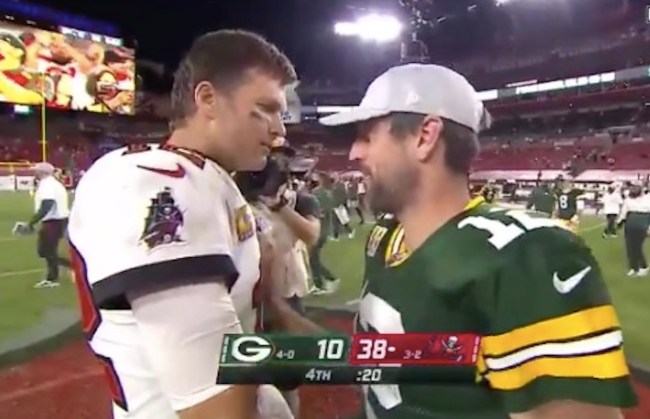 Whenever Tom Brady crosses my mind, I can’t help but think of the scene from Anchorman where Vince Vaughn’s Wes Mantooth, the only thing standing between Ron Burgundy and safety from certain death via grizzly bear, tells him that while he thoroughly hates him, he can’t help but respect him.

And that basically summarizes how I feel about Brady. Do I respect him and his legendary accomplishments in the NFL? Absolutely. At this stage, there’s simply no debating that he’s the greatest quarterback of all-time, as painful as it is for me to admit. But do I vehemently loathe the man? Yes. 1000 times yes. Colossal levels of hate. Everything about Brady is just the worst.

I could sit here and detail all the things I can’t stand about him — from leaving his pregnant wife to putting a MAGA hat in his locker only to subsequently not answer questions about it (vote for who you want to, that’s America at its best, but he should be prepared to have to answer for a message he himself went out of his way to deliver, especially considering the size of his platform), from the Patriots’ history of cheating to his corny TB12 branding and that infamously weird Facebook documentary moment — but it’s Monday and there’s no need to expend all of that negativity energy for no reason.

Instead, I’ll just show you this video of Brady giving Aaron Rodgers a postgame handshake following the Bucs’ ass-whooping of the Packers, something his noticeably did not do with Nick Foles when his team lost to the Chicago Bears — a loss that was punctuated by Brady not realizing it was fourth down on the Bucs’ final possession — the week before.

Two of the best to ever do it. @TomBrady and @AaronRodgers12 exchange words after the @Buccaneers win. pic.twitter.com/CSPjJkI0sf

Looks like Foles was trying to find Brady for a handshake after the game pic.twitter.com/AZUp5Ksb3E

And that, to me, summarizes who Tom Brady really is: when he wins, he’s ready and willing to gloat, pose for the cameras, and pay respect to his competitors, but when he loses, he tucks tail and heads for the locker room. That’s the TB12 Method™️.

I would like to know why Tom Brady hates Nick Foles… pic.twitter.com/suG6TQhkmg