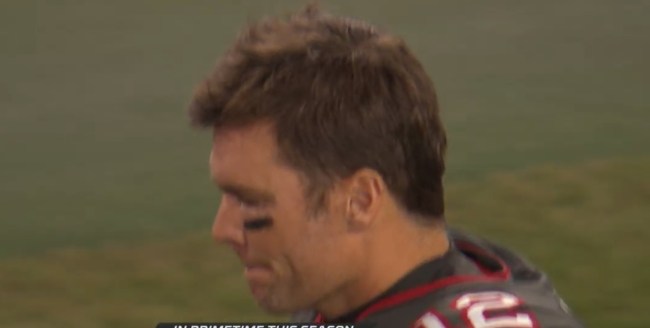 Tom Brady has found himself in another handshake controversy.

The Bucs superstar QB had an absolutely terrible performance in the Bucs 27-24 loss against the Rams on Monday night.

After the game, Rams QB Jared Goff appeared to look around for Brady to shake his hand but Brady had already made his way to the locker room.

Earlier in the season, Brady caught flack from the Internet for snubbing Bears QB Nick Foles after a loss.

FS1 host Shannon Sharpe was not happy about Brady snubbing another QB and called him out on it.

I guess Brady doesn’t know Goff well enough to shake his hand after losing. Yet, he knows every qb after he wins. Brady is full of what the elephant left on the show ground. His attitude is bulljive and it’s time to call his A** out on it. 😤😤😤

Fans also blasted Brady for being a sore loser.

I don't want to be that guy, but if, say, Lamar Jackson, skipped the postgame handshake, there would be bedlam. It's not cute or funny when Brady does it. #GoBucs #LARvsTB

What a surprise. Tom Brady didn't go to midfield to shake Jared Goff's hand – Goff who went to midfield for the post-game handshakes.

He ducked Foles after the Bears beat him too. What a little sore loser. https://t.co/q4rkM8rE9Z

Not my GOAT lol https://t.co/oiz77ojmgg