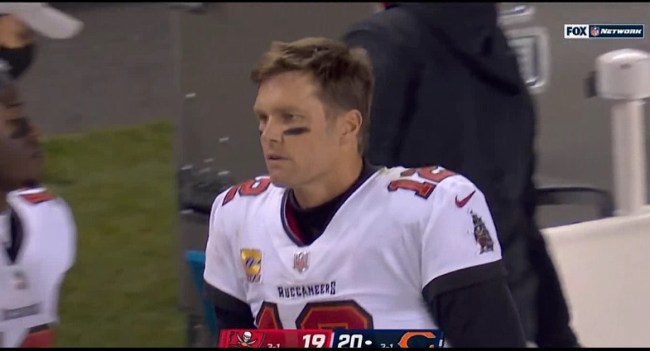 Tom Brady had a rough night against the Bears on Thursday Night Football.

At the end of game, Brady got confused and forgot what down it was after an incomplete pass on fourth down late in the fourth quarter.

It appeared that Tom Brady thought it was only 3rd down after his incomplete pass to Cameron Brate. pic.twitter.com/n3NFbZnH2o

Tom Brady thought it was 3rd down after a 4th down incompletion ended the game for Tampa Bay. pic.twitter.com/YF25w3rU3Y

After the game, Bears QB Nick Foles appeared to look for Brady on the field to shake hands but Brady had already run into the locker room.

Brady does not go out to shake Nick Foles’s hand after the Bears win pic.twitter.com/rzeiBDdRYq

Foles looking around to shake hands with Brady after the game lol pic.twitter.com/SVLwh5NA2q

Fans were angry with Brady for not shaking hands despite the fact that Brady may have been avoiding to due to the Mahomes/Gilmore situation.

What’s Tom Brady’s problem ??? He has no class – he just refuses to shake hands after Nick Foles beats him ! Grow up Tom!

Tom Brady forgot the downs and didn’t shake hands after the game. Slander him like y’all did LeBron…

tom brady is now 2-for-2 in refusing to shake foles' hand pic.twitter.com/sGX81MwT1P

Some people did defend Brady and noted that it was probably not a good idea to shake hands during a pandemic.

People are really upset Brady didn't shake hands with an opposing player during a pandemic. I need to get off twitter

Y’all want Tom Brady to shake hands in the middle of a pandemic?? Have y’all learned nothing