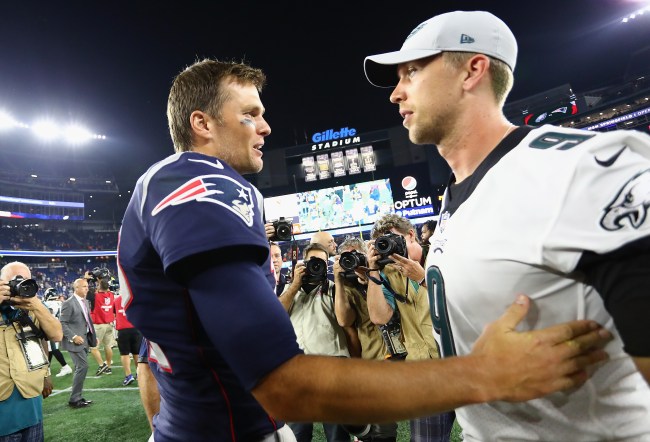 It has been four years since Tom Brady and the Patriots fell to Nick Foles and the Eagles in Super Bowl 52. After the game, Brady didn’t shake hands with Foles and Philadelphia fans are still salty.

On Sunday, Brady will face the Eagles once again, but this time as a Tampa Bay Buccaneer. Prior to the game, Brady was asked whether he knew that the fans of his upcoming opponent are still “obsessed” with the fact that he snubbed Foles.

He did not, but he does now.

The 44-year-old, seven-time Super Bowl winner continued on to provide some backstory to the snub. However, he simply couldn’t knock that grin off of his face.

Since #Eagles fans are obsessed with Tom Brady not shaking Nick Foles’ hand after SB52, I finally asked him about it because the #Buccaneers host Philly on Sunday. “I have a lot of respect for Nick. I try to be a good sport as best I can…” Brady’s full response 👇🏻 pic.twitter.com/ozB5A8kFeE

Although Brady says that he has shaken Foles’ hands multiple times, he notably did not do so after two important games. The first was following the Super Bowl.

And then, two years later, after the first meeting between the two quarterbacks since that game, Brady did it again. He left Foles out to dry and had him wondering where he went.

Unfortunately, Foles will not be in the building when Brady plays against Philly on Sunday, because he isn’t on the team. But the fact that Eagles fans have held onto the grudge and will surely welcome Brady accordingly is amazing.