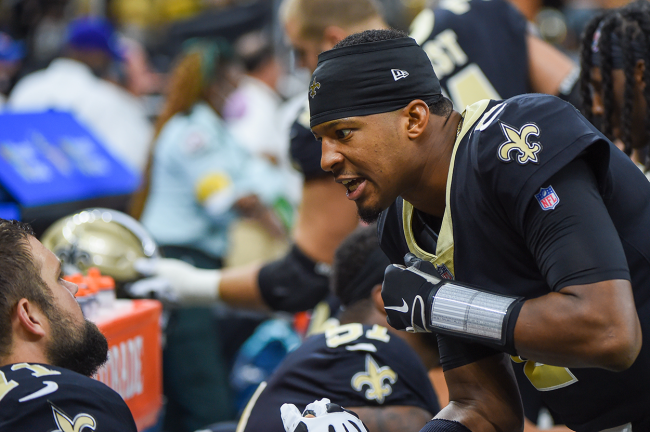 Jameis Winston recently graduated from Florida State and is on the road to recovery from a season-ending knee injury last fall. As the New Orleans Saints starting quarterback looks ahead to the 2022 season, he and some of his teammates met up in Miami for some offseason practice ahead of training camp in a few weeks.

Winston was joined by rookie first-round pass-catcher Chris Olave, veteran players like Tre’Quan Smith, Juwan Johnson and Marquez Callaway, as well as several running backs and tight ends. Essentially, anyone who might catch a pass this year was there, excluding Jarvis Landry, Alvin Kamara and Michael Thomas.

Landry was in NOLA hosting his youth football camp, Kamara was back home visiting family in Atlanta and Thomas is still working back from ankle surgery. Other than that, pretty much the entire passing offense was in Florida. As was former Saints backup Teddy Bridgewater, who grew up down the street and is currently playing for the Dolphins.

Friday was the last day of the retreat. Once the day had wrapped, Winston stepped into his role as a vocal leader.

The former Heisman Trophy winner and No. 1 overall pick is known for his speeches and soundbites. Whether he is discussing the ‘glass half full’ mentality, famously ‘eating a W,’ or talking to the youth at Dak Prescott’s camp, Winston always delivers. His legendary speeches date back to his college days.

And Friday was no exception.

Following the final session of the retreat, Winston delivered an impassioned speech to his teammates that included plenty of laugh-out-loud and smile-inducing moments. Take a look:

Winston’s speech was not his best. But it was pretty damn good and he certainly out-did himself once again.