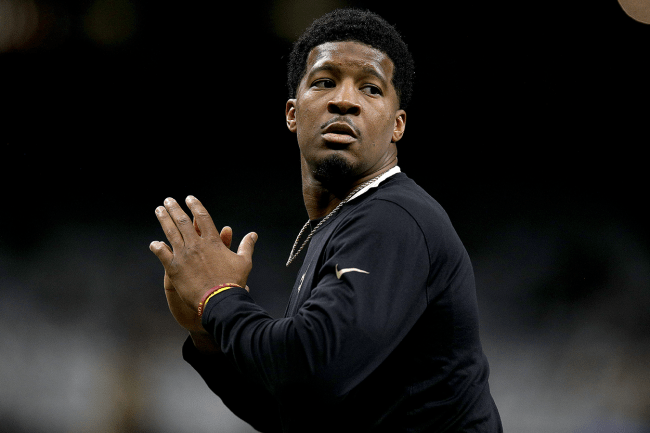 Jameis Winston is the king of offseason workouts. He is a world-class athlete and there is a method to his madness, but often times, his unique exercises look pretty hilarious.

Back around this time last year, a video of Winston working through bags with his trainer went viral, and his rehabilitation workout earlier this spring was rather unconventional. That was the case again over the weekend.

A video of Winston doing a bench press made its way onto Instagram and it was not what you would typically see from a starting NFL quarterback. At least, not usually in the public eye.

Seen laying on the ground with his feet up on an inflatable exercise ball, Winston is high-rep bench pressing with a flexible bar. It’s definitely different.

There is a method to Jameis Winston’s weird offseason workout madness, however.

The weird bar causes muscle confusion which helps to avoid plateauing. And by doing the exercise with his feet on the ball, he is balancing on his back shoulders, which creates incredible core and leg development, as well as balance.

On Tuesday, Winston followed it up with a more conventional workout. He posted a video of himself, in a knee brace, getting on-field reps.

For someone who is less than a year removed from a torn ACL, Winston seemed to be moving well and getting around just fine. There is some stiffness to his left knee because of the brace, but it’s nothing that would keep him off of the field. And, of course, he was throwing bombs.

Winston is clearly not at full strength just yet, but he is getting pretty close. The Saints are operating as if he will be the starting quarterback come Week 1 and he looks well on his way. Next up is training camp and then the preseason. Winston has some time to get right and then will try to bounce back during his first full year with a team that isn’t the Bucs.