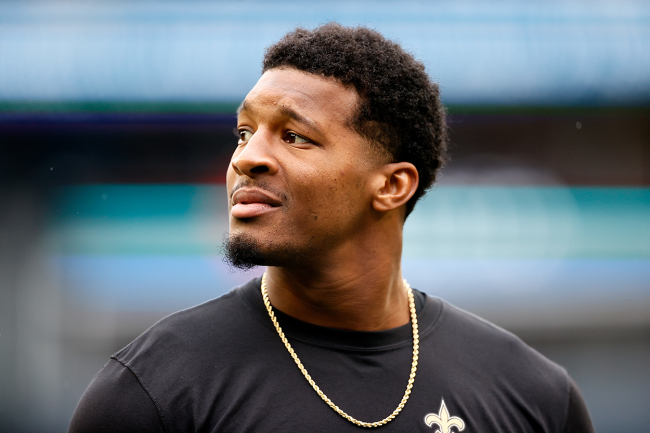 Jameis Winston has always been the king of peculiar, unconventional workouts. Whether it be shuffling through bags while keeping his eyes downfield and having someone try to punch the ball out of his hands, dodging a uvula-esque punching bag, or pushing an SUV up a hill, the 28-year-old is always up to something.

This year, Winston is recovering from a torn ACL that he suffered in Week 8 of the 2021 season. His rehab is reportedly ahead of schedule and going very well.

Videos from the offseason of the former No. 1 overall draft pick certainly make it seem like he is going to be at full strength come Week 1 of 2022. It is unclear as to where he will be playing the upcoming season, but it looks like he will be ready to go.

However, in addition to the positive updates from Winston’s workouts, he has once again gone viral for his strange approach to training. A video from Modernday Fitness shows the Alabama-native working on what appears to be balance and core strength.

The drills are unlike those that are often posted by his NFL counterparts.

In the first clip, Winston is sitting on a medicine ball, trying not to let his feet touch the ground. Meanwhile, his trainer is trying to knock the ball loose.

In the second clip, Winston is jerking his torso with a resistance band at a rapid pace. In the third clip, he is in a one-hand pushup position on a balance trainer catching and throwing a ball with his non-grounded hand.

This isn’t to question the productivity and purpose of the drills. There is surely a method to the madness.

But with that being said, it seems like Winston is always going viral for his strange workout videos. He can’t just squat, clean and press like everyone else.

Be ready for the return. Lots of Ws are about to be eaten.