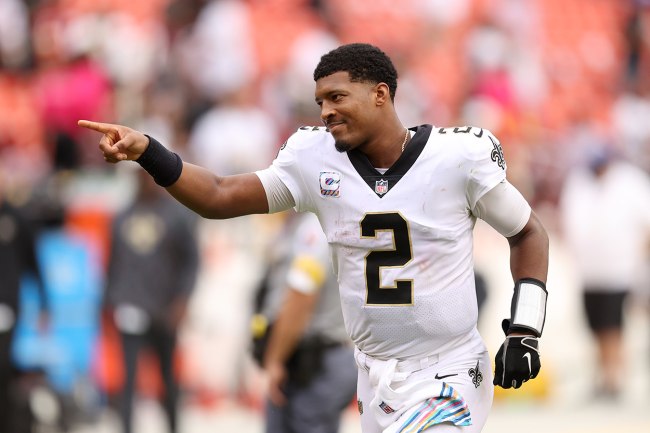 Jameis Winston spent the last nine weeks of the 2021 NFL season on the bench. Not because he was replaced, but because he had suffered a torn ACL in the first half of Week 8.

Where an injury of Winston’s nature used to be a death wish for careers, as recently as the last decade, that is no longer the case. Over the course of the last seven months, the 28-year-old quarterback has worked his way back to full strength with some unconventional, but effective workouts.

Throughout the process, Winston has refused to cut his hair because of a biblical reason and will be rocking long locks until he gets back on the field. Well, according to the Saints signal-caller, that could be as soon as today— if he wanted it to be.

Winston joined NFL Network for the 2022 schedule release on Thursday night. He spoke about his new-found passion for football and explained it as only he can.

To answer that question, Winston said that he is ready to strap up the chinstrap and get back to winning football games.

It is assumed that Winston will be the starter in New Orleans this fall and he has a very simple plan on how to win football games. Here are the teams he will have to face:

The NFL is better when Winston is in it, so the fact that he feels as good as he does is a great sign for a great year.