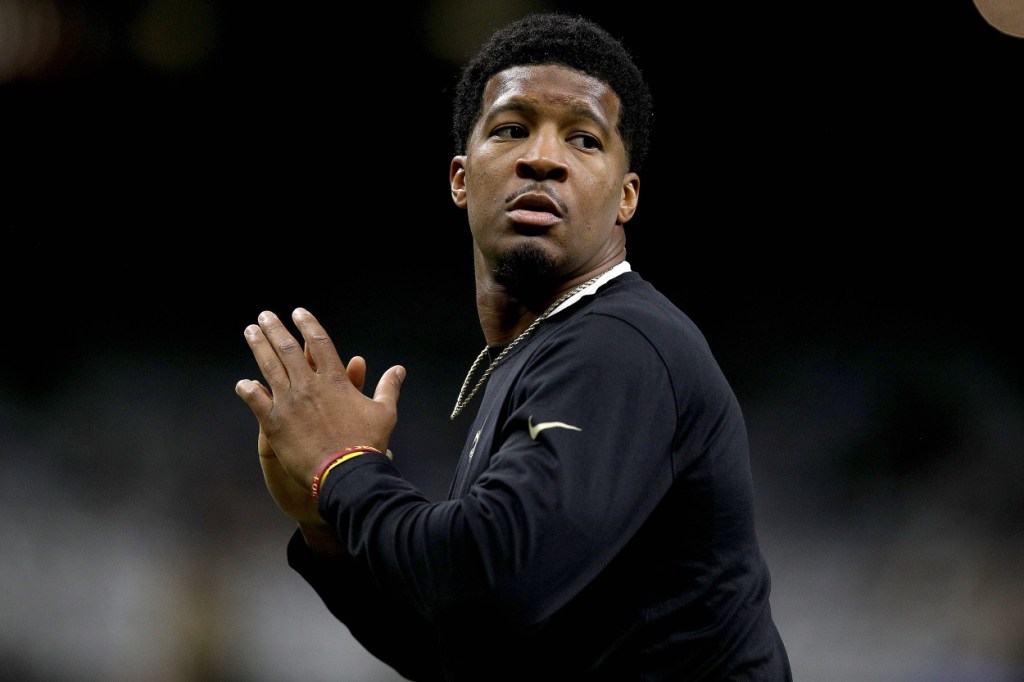 The NFC South is basically being viewed as a 1-horse race after Tampa Bay Buccaneers quarterback Tom Brady announced he was coming back. Currently, my Bucs are -280 to win the NFC South followed by the Saints who are +400, the Panthers are +1100, and the Falcons at +1300. Even Jameis Winston signing a 2-year contract with the Saints didn’t move the line much, it’s still the Bucs’ division to lose.

It remains to be seen if Jameis Winston knows he and the New Orleans Saints aren’t expected to compete for the division. I say this because the latest comments from Jameis make it sound like he believes he’s unlocked the key to winning every game, and he very well might have.

Pretty much every football fan (NFL and College) has seen Jameis hurl the ball down the field and hope for the best. His play sometimes embodies Carrie Underwood’s lyrics of ‘Jesus Take The Wheel’ where he just launches the ball and hopes for the best. But he spoke with ESPN’s Mike Triplett and believes he “can do everything your favorite quarterback can do.” Jameis Winston shared his plan to win games and it’s so simple it just might work.

Jameis Winston Reveals How He Plans On Winning Saints Games

Former Saints coach Sean Payton valued Jameis for “his arm talent and his leadership.” Now, Jameis is working to improve in the areas that will have an immediate impact on the field:

But when asked what area of his game he wants to focus on improving next, Winston said, “I’m really excited to focus on my intermediate accuracy.”

“Getting those easy completions to Alvin Kamara,” Winston said. “We saw that in the [victory at the Seattle Seahawks last year], how effective that was. You know, really perfecting the passes from behind the line of scrimmage to 10 yards down the field.”

Another interesting takeaway from that ESPN interview is that Jameis has shifted his opinion on being a ‘game manager’. He apparently used to dislike having to manage games because he just wanted to get out there and score on every. single. possession. But watching Drew Brees lead the Saints shifted Winston’s opinion on that:

But Winston admitted that while he used to dislike the idea of being a “game manager,” one of the greatest lessons he learned watching Brees is there is a time and place for trying to “light the scoreboard up.”

“I know I can make the big plays, but really just staying in the rhythm of completing the football, keeping the offense going throughout the course of a game is something that I’ve been able to focus on,” said Winston, who pointed out that his current injury rehab has actually helped with that since he has been limited from throwing deep balls.

I’m a born-and-raised Bucs fan and a Florida State graduate, so I’ve followed Winston’s career as closely as anyone and when he’s at his best he’s as good as it gets. When the Buccaneers drafted Jameis Winston at #1 overall it was an incredible moment for me, seeing my college’s QB become my NFL’s QB.

Jameis is at a point in his career where he could take the field and do exactly what he says he’s going to do. Get accurate with short passes to Kamara. Know when it’s time to light the scoreboard up. Stop making costly mistakes. And if he does that the New Orleans Saints are poised to succeed. But Jameis Winston is 28-years-old and has now been in the NFL for 7+ seasons. I want to believe Jameis when he says he’s figured it out but why now?