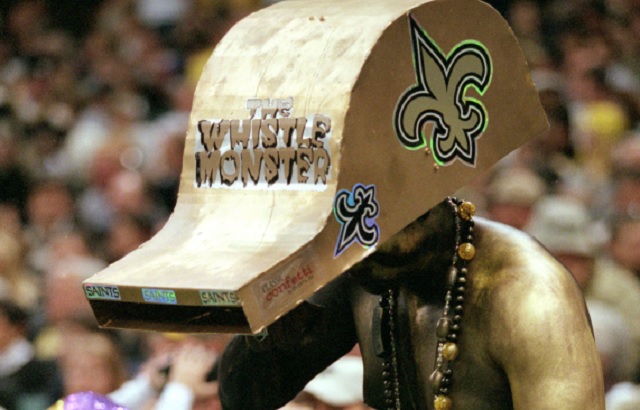 The New Orleans Saints might have the world’s most annoying fan.

Someone has to go get that whistle out of the crowd. It’s driving me nuts. @NFLonFOX

Dear @FOXSports engineer working the #SaintsvsRams game,
For the love of god! Turn down the feed of whichever crowd noise mic that is constantly whistling. You know which one. You can hear it too. Or at least drop that frequency on your EQ.

Anyone else hearing actual whistles in crowd? Or just my TV ?

Man there is an annoying whistle sound🔈 during this Saints and Rams football🏈 game. Is he sitting right beside the mic🎤. Someone find🔎 that guy and rip it out of his mouth. #AFCChampionship #SaintsvsRams

Apparently the whistling noise is coming from one dude who calls him the “Whistle Monster” and dresses up as a large whistle.

This is the person making the whistling sound you hear on your television. No lie. (and no, it doesn't come from that whistle but himself)#HomeInTheDome pic.twitter.com/nedN3sB7kW

Update on whistle man: He doesn’t actually possess a whistle. This is him. And he whistles all game long. God-given talent. pic.twitter.com/sIZ412QM2B

Here’s a video profile of the “Whistle Monster”.

Seriously, the NFL has to do something about this guy, the whistling is making the game almost unwatchable.

OH MY GOD CAN THE FAN THAT’S WHISTLING STFU

whistling from the Saints fan pic.twitter.com/yeefBdCLYl

I really love when twitter comes together. You ALL hate the whistle man. Not one person is sticking up for him. It is a miracle.