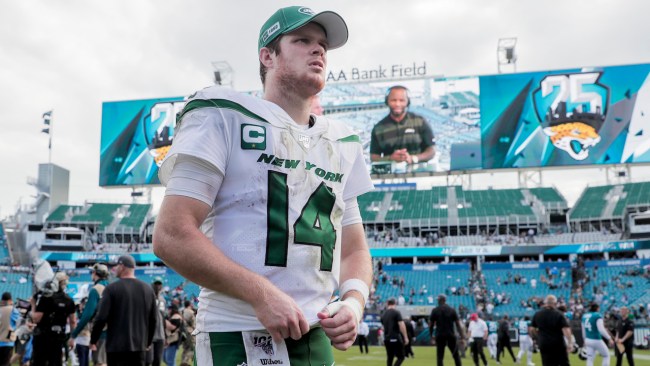 Stop me if you’ve heard this one before: the New York Jets are dead and buried before Halloween.

That’s right, for what seems like the umpteenth consecutive year, the New York Jets season has entirely unraveled before the month of October even ends. And while the Jets’ season crumbling before their very eyes in nothing new, what makes this season different than recent years is that there was actually some semblance of hope surrounding the moribund franchise.

Sam Darnold was supposed to build on the promising final month of his rookie season. Le’Veon Bell was supposed to provide the second-year quarterback with a safety valve. The Jets’ playmakers were supposed to be the best crop they’ve had in years.

Of course, none of that has come to fruition, as the Jets are currently 1-6 and they rank dead last in offensive yards per game.

And not only are the Jets a joke on the field, but they’ve — ONCE AGAIN — become a laughingstock off the field thanks to Sam Darnold’s memeified Week 7 comment that he was “seeing ghosts” against the Patriots.

Obviously, everyone in and around the NFL has taken these comments and ran with them, including the Jacksonville Jaguars, who slyly played the Ghostbusters’ iconic theme music while showing Darnold’s “highlights”:

The #Jaguars are playing Ghostbusters over a Sam Darnold blooper reel. 👻 pic.twitter.com/GSxZopCWVF

Darnold really didn’t do himself any favors by dropping his infamous ‘seeing ghosts’ line during Halloween, either.

The New York Jets’ miserable 2019 season — which will likely be head coach Adam Gase’s first and last at the helm — continues next weekend when they take on the equally pathetic Miami Dolphins.

If Darnold can’t get his act right then, us Jets fans are going to have a serious quarterback crisis on our hands… again.