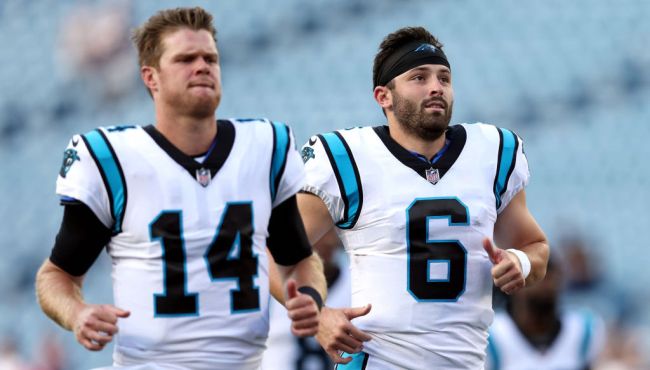 As a wildly unfortunate life-long New York Jets fan, trust me when I say that I harbor absolutely zero ill will towards Sam Darnold. Similar to the likes of Mark Sanchez before him, the Jets picked the promising young University of Southern California standout with a Top 5 NFL Draft pick, and after various brief glimpses of promising quarterback play, they ultimately derailed their development with poor coaching and roster decisions. Getting drafted by the Jets was the worst thing to happen to both those guys.

But then, at the still young age of 24 years old, Darnold was traded to the Carolina Panthers and given a fresh start and a new opportunity to prove himself, which he ultimately… didn’t.

Starting in 11 games last year, Darnold compiled a 4-7 record (after the Panthers opened the season at 3-0) and completed 60% of his passes for 2,527 yards, nine touchdowns, and 13 interceptions. He also had nine fumbles, losing three of them. Similar to his time in the Big Apple, the California signal caller just couldn’t seem to get his turnovers under control.

As a result, the Panthers seemingly lost faith in the idea of Darnola as their franchise QB and decided to trade for Cleveland Browns castoff Baker Mayfield, who was officially named the team’s starter earlier this week.

Speaking to reporters about the decision, the now 25-year-old Darnold — likely facing a career as a permanent backup — candidly said that losing the competition to Mayfield “sucks.”

“I think for me, personally, it sucks — to be quite honest. It’s just tough whenever you go into camp battling for a starting job, putting everything out there to be the starter and it doesn’t go your way. There’s no sense of relief or anything like that for me,” Darnold said.

Ironically enough, Mayfield and the Carolina Panthers will open the 2022 season against Mayfield’s former employers, the Cleveland Browns. The Browns, however, will be without Deshaun Watson — the QB they replaced Baker with — due to his 11-game suspension.