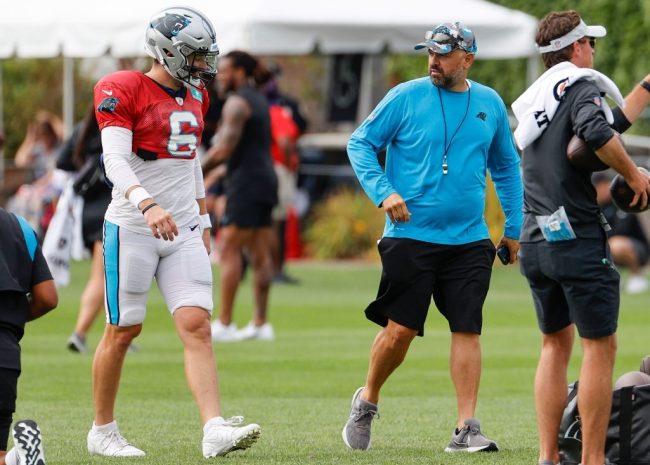 The Carolina Panthers have officially named its starting quarterback. Baker Mayfield joined the franchise via trade and was able to secure the job after just two preseason games. Matt Rhule seems ecstatic about Mayfield right now, as the head coach raves about him with the 2022 season quickly approaching.

Many believed it was his job to lose, as Sam Darnold hasn’t lived up to expectations since joining the league back in 2018. Panthers fans should feel better about their chances this coming season, as Mayfield is a better option than Darnold. Matt Rhule seems to think so too, as according to Sheena Quick, Carolina’s head coach is loving Baker Mayfield right now.

“It’s not easy what he did.” Rhule describes how quickly Baker Mayfield picked up the offense. Adds that Mayfield was “stoic and professional” when finding out he’s the starter. #Panthers

It is rather impressive to see Mayfield win the starting role so quickly. He clearly picked up the playbook quickly and will now lead the Panthers through the 2022 season. Additionally, Baker Mayfield seems ready for the challenge. Especially considering Rhule described the veteran quarterback as “stoic and professional” when hearing he won the starting job.

We’ll see how it plays out though. The feeling around the league is that Carolina is a quarterback away from becoming a playoff contender. They have the weapons necessary to light up the scoreboard and the defense is vastly underrated. Regardless, Baker Mayfield has had a roller coaster of a career. For that reason, Panthers fans will be watching their new quarterback closely.

Hopefully, Mayfield can put the pieces together and help lead Carolina to a possible playoff appearance. If not, it could spell trouble for both himself and Matt Rhule. Keep an eye on the Panthers this year, as this franchise has everything on the line.