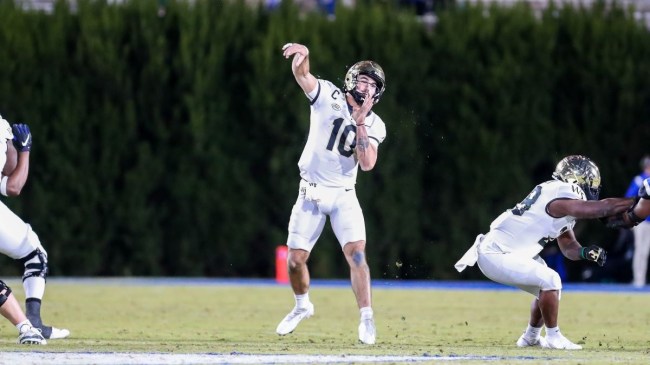 Wake Forest quarterback Sam Hartman rose to national stardom a year when he led the Deamon Deacons to an 11-3 record and a spot in the ACC championship game. Hartman was also popular for his willingness to discuss his struggles with mental health and how therapy helped him grow and develop.

With the senior signal caller back for his fifth season, the expectations were sky-high in Winston-Salem. But before the season even began, Hartman was ruled out for undisclosed reasons. Thankfully, he returned quickly and it was announced that he’d been dealing with Paget–Schroetter disease. The disease can cause deep vein thrombosis that can lead to the formation of blood clots.

Hartman played well after returning. He completed 63 percent of his passes for 3,421 yards, 35 touchdowns and just 11 interceptions. But Wake struggled to replicate its success from the year prior. The Demon Deacons finished the regular season just 7-5.

On Friday, Hartman made a stunning revelation of all that he dealt with physically during the season.

Sam Hartman just revealed that he had to have a rib removed and he now has it in his refrigerator and plans to get it made into a necklace. Also he shaved his beard. This is all so disturbing.

Hartman told ESPN’s David Hale that he had to have a rib entirely removed due to the disease. But that wasn’t all. Apparently, the QB opted to keep the rib and plans on having it made into a necklace.

I’m currently in two minds about the whole thing.

For one, keeping the rib that you had plucked out of your own body is metal as hell. But on the other hand, putting it on a necklace is highly questionable.

What in the Jeffrey Dahmer kinda bullshit is going on here https://t.co/79AYceMVg4

IM SORRY THE RIB IS BEING MADE INTO WHATTTTT https://t.co/oKWh15JfFe

Unfortunately, all the conversation may be for naught. Dr. David J. Chao, better known of Pro Football Doc on Twitter, says Hartman’s story is unlikely.

A good story, but I doubt this.
Medical professionals can sterilize and give implants back to patients but there is a strict prohibition on biologic tissue. https://t.co/Ohe7VIfSKm

Chao says that while doctors often offer to give patients back implants, they cannot do so with biological tissue. But we’d much rather believe Hartman got a pass here.