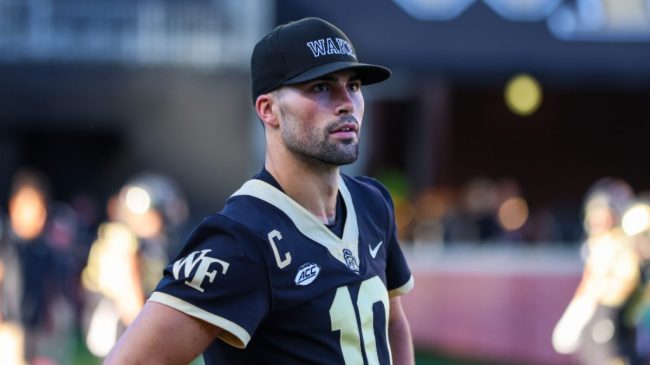 The Wake Forest Demon Deacons have made some noise early in the college football season. Not only are they ranked within the top 25, but the team received some fantastic news on Wednesday. Sam Hartman, the star quarterback for this offense is finally cleared to play, improving the Demon Deacons’ chances of maintaining their top ranking.

According to PFF College, Hartman has been medically cleared to return to football. He could play as early as Week 2, as Wake Forest takes on Vanderbilt. We’ll see if he hits the field or not, but this is exciting news for Sam Hartman and the Demon Deacons.

BREAKING: Wake Forest QB1 Sam Hartman has been medically cleared to return to football THIS SATURDAY at Vanderbilt, per @PeteThamel.

In August, Wake Forest’s star quarterback was sidelined due to a “non-football injury.” The reason being, that “Hartman was diagnosed with Paget-Schroetter syndrome — also known as effort thrombosis — a blood clot often associated with repeated strenuous activity,” per ESPN.

Sam Hartman underwent surgery to remove the clot and it was successful. Now, after recovering from surgery for several weeks, Hartman is cleared to return under center.

The Demon Deacons could use his presence in the pocket. Especially considering they’re ranked as a top program in the nation. With Hartman back in control, Wake Forest has the potential to go the distance. We’ll see how it plays out, but everyone involved is massively excited about his future.

Keep an eye on this kid, as his official playing status for Week 2 is still up in the air. Wake Forest may consider giving him one more week before giving him back the reigns. Regardless, it’s nice to see that the injury wasn’t serious and that Sam Hartman can keep playing football.