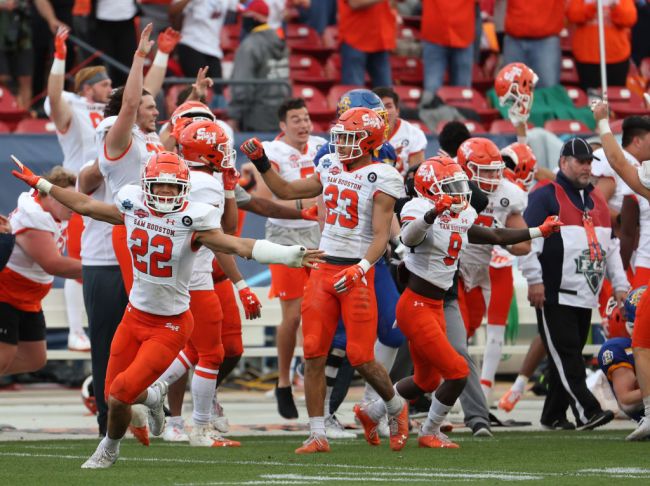 It took four months longer than expected, but the 2020 FCS football champion has been crowned! Sam Houston State won its first-ever college football National Championship on Sunday night with yet another incredible comeback.

The Road to Frisco.

The Bearkats entered the 16-team field as the 2-seed and played their way into a ring with four-straight one-possession wins. Sam Houston kept off a late comeback from Monmouth in the First Round, and then things got interesting. Against North Dakota State, the reigning national champs, it took a late touchdown to take back the lead and advance. In the semifinals, against 3-seed James Madison University, it was an even taller mountain to climb.

JMU went up 24-3 at halftime, before SHSU scored 28 in the third quarter. The defense stepped up in the final 15 minutes and the Bearkats held strong to win 38-35. This all goes to say that Sam Houston knows a thing or two about comebacks.

Sunday’s game was bound to make history. North Dakota State’s dynasty has come to an end, which opened the door for some new faces. One of those teams was the Bison’s in-state rivals and the nation’s top team. South Dakota State owned “the Dakotas” in 2020-21 and carried an undefeated record into Frisco.

It was pouring rain when the two schools arrived in the Lone Star State. The weather made for some sloppy play from the start and neither team could find a rythym. After falling behind 7-0, the Bearkats found paydirt in the second quarter. Jequez Ezzard danced his way in from 35 yards out.

Not long thereafter, lightning struck in the area, causing a delay. One hour and 11 minutes later, play resumed and Ezzard scored again. With a 14-7 lead at halftime, the back-and-forth matchup was going Sam Houston’s way.

And then that narrative changed.

South Dakota State scored 14 unanswered in the fourth quarter and took a 21-17 lead on one of the craziest runs of the year.

With just under four minutes remaining, the Bearkats faced yet another deficit. They are no stranger to fighting back, which was again the case on Sunday. Going 60 yards with only one timeout, quarterback Eric Schmid slipped the game-winner through a tight seam to Ife Adeyi.