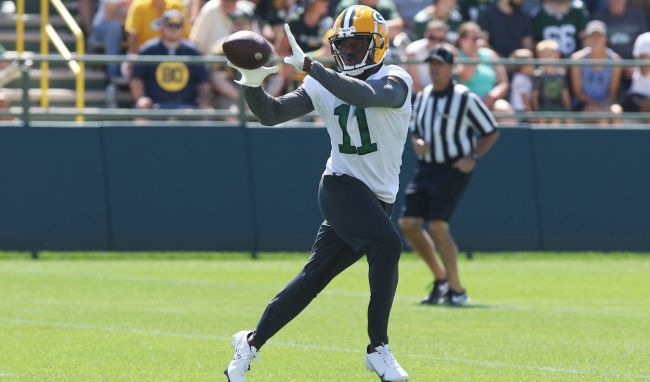 While 29-year-old wide receiver Sammy Watkins has yet to play a regular-season game for the Green Bay Packers, he’s seemingly already mesmerized by the talents of the franchise’s MVP quarterback Aaron Rodgers.

During a recent interview with the Green Bay Packers official website, the team’s new pass catcher called Rodgers “amazing” while explaining why he’s on “another level” than fellow otherworldly quarterback Patrick Mahomes, whom he played with last season.

“I think Pat is incredibly good, but A-Rod is on a whole ‘nother level,” Watkins told Cobb. (And when McCarren repeated that quote to Watkins, Watkins didn’t deny saying it.)

“He’s amazing,” Watkins said of Rodgers. “How he controls the ball. How he puts everyone in place. I’ve been with a lot of quarterbacks, and I’ve never seen them carry themselves like Aaron Rodgers,” Watkins said in an interview with the official Green Bay Packers website.

Sammy Watkins, who's been on teams with both #Chiefs Patrick Mahomes and #Packers Aaron Rodgers was asked how the two compare:

"Pat is incredibly good but A-Rod is on a whole other level." pic.twitter.com/a1215aG3mG

Drafted with the 4th overall pick in the 2014 NFL Draft, Watkins has played for the Buffalo bills, Los Angeles Rams, Kansas City Chiefs, Baltimore Ravens, and the Green Bay Packers. During the course of his career, Watkins has racked up 348 catches for 5,059 yards and 34 touchdowns. The former Clemson University product has had over 1,000 yards receiving just once during his career back in 2015.

Watkins, Rodgers ad the Green Bay Packers will play their final preseason game against the Kansas City Chiefs on Thursday, August 25 at 8 p.m. They will then kick off their 2022 regular season and defense of their NFC North crown on Sunday, September 11 against the Minnesota Vikings, their divisional rivals.

RELATED: It Might Be A Long Year For The Green Bay Packers Offense Based On The Receivers Aaron Rodgers Wants To Start