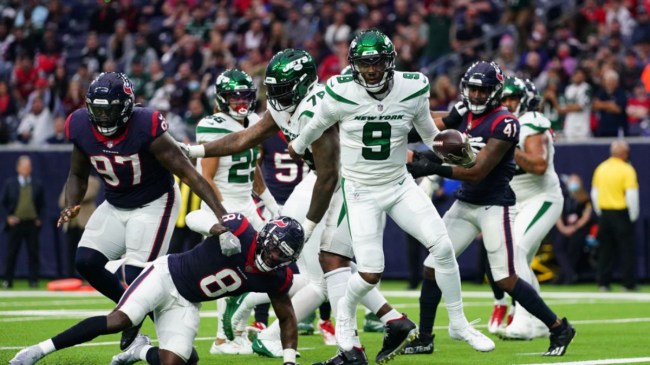 The San Francisco 49ers have had pretty terrible luck at the quarterback position this season.

Before the start of the season, the 49ers decided to move on to Trey Lance as their starting quarterback after 4 and a half seasons of Jimmy Garoppolo under center. Lance suffered a season-ending ankle injury in Week 2.

The 49ers then turned back to Garoppolo and once again found success with Jimmy G. The team won 7 out of 10 games with Garoppolo back under center and found themselves in first place in the NFC West.

This weekend, Garoppolo suffered a foot injury that will cost him at least the rest of the regular season.

After he was injured, the 49ers turned to rookie quarterback Brock Purdy. Purdy threw for 210 yards and a pair of touchdowns in a win over the Miami Dolphins.

Despite a solid performance from Purdy, the 49ers decided to get some veteran reinforcements at the position. Today, the 49ers announced that they signed Josh Johnson. It’s the 4th time the veteran quarterback has signed with the organization,

The #49ers have signed QB Josh Johnson to a one-year deal.

Johnson is best known for holding the NFL record for most teams played for in a career. He has played for 14 different teams over the course of his NFL career and has actually appeared in games for 6 of those teams.

Despite having previously signed with the 49ers 3 times, Johnson has never actually taken a regular season snap for the team.

Johnson was kept busy last season, appearing for 2 different teams in 2021. The first was the New York Jets, where he appeared in 3 games and threw for 334 yards and 3 touchdowns.

The Baltimore Ravens then signed him off of the Jets’ practice squad for a spot start while Lamar Jackson and Tyler Huntley were both unavailable. In that start he threw for 304 yards and 2 more touchdowns.

Maybe this will be the year he finally throws a pass for the 49ers.