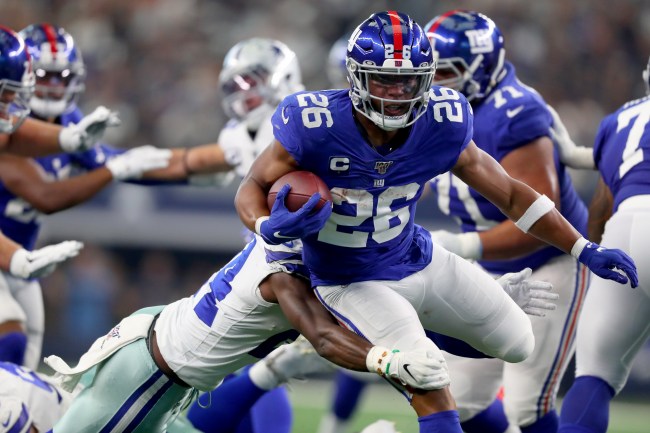 It seems like the kid who got snubbed by Cowboys DeMarcus Lawrence is getting a happy ending after all.

Last week, this video showing Lawrence denying a little kid an autograph because he was wearing a Giants jersey went viral on Twitter.

Lawrence took to Twitter and said he wasn’t sorry for dissing the kid.

It’s crazy how you fans want to attack me for not signing for a kid. It’s more than one kid that come to the game with Cowboys jerseys and never get to meet any player. So if I’m honest with my own kids I will never treat your kid better than mine so suck it up. #SorryNotSorry https://t.co/FwI7SI8rYS

The Cowboys defensive end then spoke with the USA Today and tried to turn to his snubbing of the kid into a motivational tactic.

“The ‘no’s’ I got leading up to my career and being able to not get on the field with my teammates — I think that helped me out a lot in understanding where I want to be and what’s really important to me,” Lawrence said.

Lawrence sees now the video showed “sadness on the kid’s face,” he said Wednesday from his locker after practice, and for that “I apologize.” But the Cowboys’ captain says he was “shocked” at what he views as disproportionate criticism and believes it misses the point.

“You can’t just walk around life and think you have the privilege of getting everything you want,” Lawrence said. “When you hear no, you have to be able to accept that no and move on. Maybe that no led you to going to the next person and you get their autograph. It’s just like a door salesman: You’re going to get some no’s when you go and sell insurance at people’s doors. They’re going to tell you no, no, no. If you keep coming home to your wife with a no, she’s eventually going to leave you. ’Cause you’re not bringing no money to the table or food.

“It’s all about getting back out there and keep trying, bro.”

According to TMZ Sports Saquon Barkley saw the video and has now invited to fly the kid and his family to New York to go to a Giants game.

Well, Barkley saw the whole situation … and guess what??? HE WANTS TO HANG OUT WITH THE KID NOW!!!

Sources close to the situation tell us Barkley reached out to the Bautistas this week and invited them to their Nov. 10 game against the Jets in New York.

We’re told Barkley is flying them out and will give them a meet-and-greet experience as well as VIP treatment at MetLife Stadium.

Oh, and we’re told the kid will almost certainly get some autographs from the team too!!!