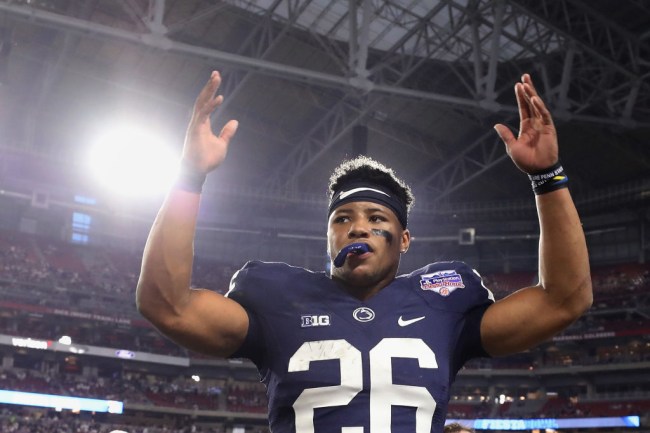 Last month, nearly one year after Saquon Barkley and Penn State sophomore Anna Congdon revealed that they were dating on Instagram the couple announced that they were expecting their first child together.

“I’m looking forward to being a role model and setting an example for my kid,” “That’s the most important thing I’m focused on right now: Being a better father and a better player every single day.”

Tonight, Barkley announced that his girlfriend, Congdon, had given birth to their daughter less than 48 hours before the NFL draft.

Congratulations to @saquon Barkley, who just became a first-time dad today. He was so excited when he called he forgot to give me the name of his new baby girl. Congrats, Saquon. The draft will be the second-biggest thing that happens to you this week. See you tomorrow!

Update: Barkley uploaded this picture of his daughter Jada Clare Barkley on Instagram

Words can’t even describe how I feel right now. You are the most beautiful thing I’ve ever seen in my life. Thank God for blessing me with you in my life and into my arms. I pray that I can be the best father to you and help you grow into an amazing woman. I love you so so so much #DaddysLittleGirl Jada Clare Barkley 4.24.18

No matters what happens to Barkley on draft night it’s clear that he’s already winning in life.