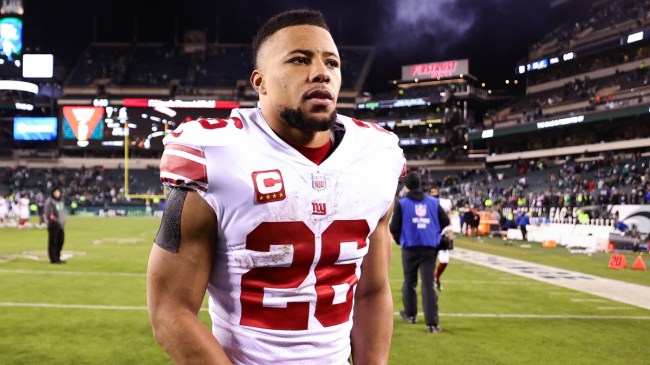 The New York Giants have a big decision to make, as Saquon Barkley is set to hit free agency. It sounds like the franchise wants him back, but at what cost?

It sounds like New York made an offer in the middle of the season, however, Barkley turned it down. Now, he details the exact type of contract he’s looking for.

According to Ralph Vacchiano, Saquon Barkley turned down a deal that would have paid him $12 million per year. The Giants’ star running back claims he’s not looking to reset the market. However, he makes it clear he wants “Christian McCaffrey” money.

#Giants RB Saquon Barkley turned down a contract extension worth around $12 million a year, per @RalphVacchiano

That would put Barkley averaging about $16 million per year. It’s unclear whether or not the Giants are willing to offer him a contract like that. Additionally, the team could opt to place him on the franchise tag if a deal can’t be agreed upon.

Luckily for New York, there is plenty of time to negotiate a deal with Saquon Barkley. We’re still in January and the free agency period doesn’t open Until March. So, we should expect to hear more information trickle through until a potential deal is signed.

We’ll see how it plays out though, as Vacchiano makes it sound like the Giants aren’t going to budge much from their original offer.

… Considering the projected franchise tag for RBs is $10.1M, it really didn’t sound like the Giants’ bye week offer to Saquon Barkley is going to increase by much.

They have a lot of other spending priorities this off-season.

Keep a close eye on this situation, as things will ramp up as the offseason progresses.