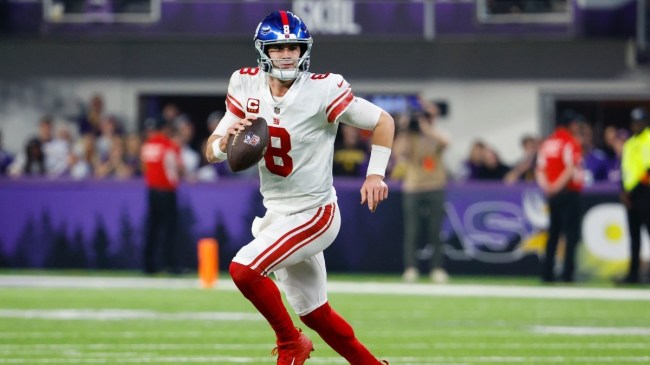 Daniel Jones was considered by many to be a lost cause as the New York Giants’ franchise quarterback. He was fumbling at a historic rate through his first three seasons, and hadn’t led an offense anywhere near league average.

But, Jones was excellent this year for the resurgent G-Men, as he led the team to a playoff appearance. And, he played the best game of his career in the Wild Card Round in a 31-24 road playoff victory over the Minnesota Vikings.

Daniel Jones scrambled 6 times against the Vikings. All in the first half.

The results: 59 yards (a 9.8 average) and 4 first downs. With every scramble resulting in a successful play for the Giants.

I also included a designed run the Giants used Jones on a key 3rd down. https://t.co/Nf11XYCMkY pic.twitter.com/nx8zKc7ifO

DANIEL JONES ACROSS HIS BODY!! pic.twitter.com/2h55JkJkT6

Daniel Jones is underrated , if another QB does this they will get so much attention from major sport Channels Credit https://t.co/z5AiRz7cOf on TikTok pic.twitter.com/U6eLZ4mkBr

Now, he’s received an award for his efforts, one of the most coveted awards in the sport.

That’s right! He’s the winner of the Nickelodeon Valuable Player. He joins illustrious winners such as Justin Tucker, Pat Mahomes, Tom Brady, the Detroit Lions defense, and both Josh Allen’s.

Jones will look to keep his season going when he goes on the road to Philadelphia Saturday night.