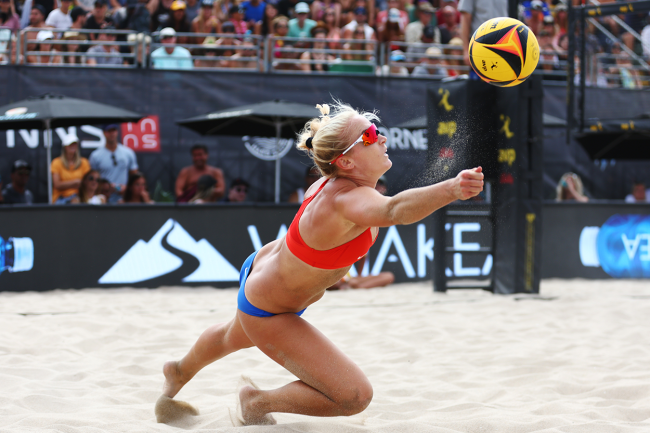 Sara Hughes may not have won the Hermosa Beach Open, but the 27-year-old made the most ridiculous play of the weekend. She made a ridiculous amount of digs before getting up and finishing with a kill.

Hughes, who won back-to-back NCAA Championships in 2016 and 2017, turned pro later that year and became part of the youngest team to win an AVP Tour event. Since then, she has been praised as a right-side defender who is known for her speed and willingness to chase down balls anywhere on the court.

Those skills were on full display on Sunday.

During her and Kelley Kolinske’s quarterfinal match against Larissa and Lili Maestrini, Hughes was all over the sand. She and her partner took the first set 21-15 and went on to win the second set 21-13.

In the process of the second-set win, Hughes pulled off one of the most ridiculous rallies that you will ever see.

Kolinske served, and when the ball came back over the net, Hughes laid all of the way out to barely get the ball up. Her partner, who was also in a tough spot, bumped the ball back up toward the center of the court as Hughes got to her feet for a moment before hitting the sand once again and just barely getting the ball over the net.

A quick one-touch from their opponents saw the ball back on Kolinske and Hughes’ side, forcing the latter to dive back to the beach for the first touch. Rising to her feet, Hughes was able to set up at the net and put an easy set from Kolinske straight down for the kill.

It was insanely impressive, take a look:

Our play of the day may have already happened. 🤯@SaraHughesBeach covered every inch of the court before laying down an absolute hammer.

Hughes’ rally was ridiculous. She covered so much ground, was belly to the sand on three occasions, and still managed to hulk smash the winning point. Incredible stuff from the American.