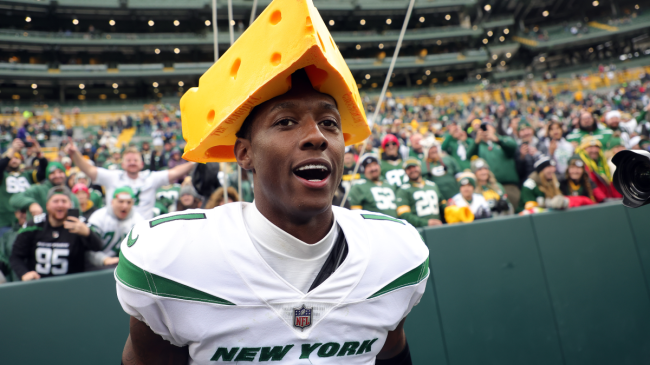 The Jets pulled off the weekend’s most surprising upset in Week 6, taking down the Packers in Lambeau Field. Not only did the team lose, but last year’s MVP Aaron Rodgers was benched before game’s end.

The game was well out of hand at that point, leading many to joke that Rodgers’ retirement is now imminent.

The stars of the game were running back Breece Hall, who rushed for 116 yards, and a New York defense/special teams group that allowed just 10 points and blocked a punt.

After the game, one of those key defenders took a moment to mock the Green Bay fanbase following the win.

Sauce Gardner put on a cheesehead hat to troll Packers fans before Allen Lazard knocked it off his head.

Garnder not only put the cap on, but he went straight to the sidelines to troll those fans still in attendance. The cornerback paced up and down the stadium walls, getting a reaction from the Packer faithful.

Another angle of the celebration shows Gardner taking his exploits to endzone, where he trolled a few more Green Bay supporters. The Jets fans in the crowd certainly enjoyed the show, though.

#Jets CB Sauce Gardner wearing a cheesehead as he leaves the field, until a #Packers player (looked like Allen Lazard) knocked it off his head.

Big win for the Baby Jets at Lambeau Field. pic.twitter.com/YX1QXMbzKZ

After seeing Garnder being a menace with the cheesehead, Packers’ wide receiver Allen Lazard took offense. He quickly smacked the cap from atop Gardner’s head as the two made their ways to the locker room.

A little chippy. Obviously, Lazard was frustrated after another tough performance.

It was a huge win the Jets, who are now 4-2 on the season. They’ve now won three straight matchups to move into second place in the AFC East.

Green Bay, meanwhile, fell to 3-3. It was the second consecutive defeat to a team from the Big Apple as the Packers blew a double digit lead last Sunday in a loss to the Giants.

The Packers will try to rebound in Week 7 while Sauce Gardner will celebrate another huge upset.