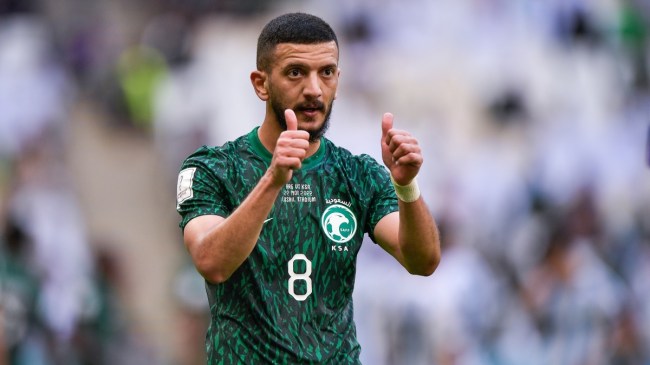 The World Cup match early Tuesday morning between Saudi Arabia and Argentina was supposed to be all about the debut of legend Lionel Messi at likely his final World Cup. The 35-year-old is considered one of the greatest players ever. But, he has not won a World Cup yet. If he leads his teammates to glory at this year’s World Cup in Qatar, it would go a long way toward being the GOAT.

And, things started out well for Messi and his teammates against Saudi Arabia. But, they ended in disaster in one of the great upsets in the tournament’s history

It was all Argentina in the early going. Messi scored a penalty in the 10th minute, and Argentina should’ve scored one. They put the ball in the net repeatedly in the first half, only for the goals to be disallowed due to offside.

Messi was this close to having a second goal 👀 pic.twitter.com/2dBvJpQiCm

After a VAR check, this goal did not count for Lautaro Martinez and Argentina pic.twitter.com/d8uCuC1tMW

It went to halftime with Argentina winning 1-0. And, it was certainly reasonable to expect the blue and white to pour it on in the 2nd half. After all, they had been the better side in the first half and had many near misses. The Saudis had other ideas.

In the 48th minute, Saleh Al Shehri scored a class goal to even up the score at 1.

But, the Saudis weren’t done. Just five minutes later, they scored the goal of the tournament so far. It’s a goal that reverberated around the world.

That is a perfect strike by Salem Aldawsari, and will almost certainly be the biggest goal he ever scores.

Look at this reaction by Saudi Arabia fans.

Still, they had to keep Messi and Argentina from scoring for the remainder of the game. But, heroic defending and goalkeeping kept Argentina off the second-half scoresheet and handed Saudi Arabia arguably the most famous win in the nation’s history.

Another MASSIVE save by MOHAMMED ALOWAIS 🔥 pic.twitter.com/KfeHccbBHS

SAUDI ARABIA PULLS OFF ONE OF THE BIGGEST UPSETS IN FIFA WORLD CUP HISTORY 🤯 pic.twitter.com/Ip8HI1gRLe

The entire sports world is in shock

While the match may have kicked off at 5AM ET here in America, it was in a much better time slot in the soccer-crazed rest of the world. And, surely it was one of the biggest moments on Twitter so far this year.

Americans woke up to an absolute shock.

Fans in the U.S. waking up to see that Argentina result 😅 pic.twitter.com/xhtCwfOj8k

Phenomenal from Saudi Arabia to take down the Argentina team I had winning the tournament.

I can’t imagine how people back in Argentina feel right now.

Here was the scene in Buenos Aires, Argentina.

Saudi Arabia will play Poland on Saturday, while Argentina faces a must-win match against Mexico the same day.